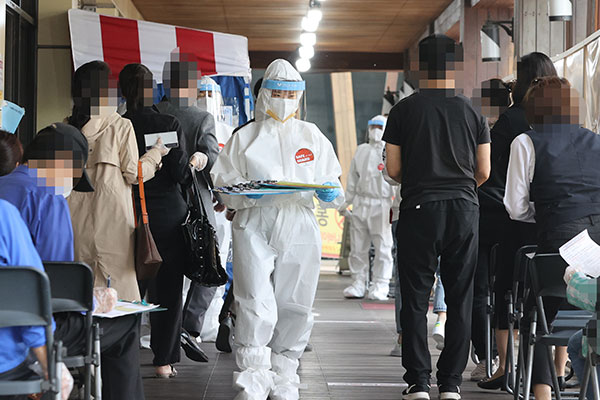 Anchor: Daily new COVID-19 cases in South Korea neared 800, hitting the highest number reported since January 7. The spike in cases comes as a cluster of at least 32 Navy sailors on a vessel were infected with the coronavirus.
Choi You Sun reports.

It is the largest number of daily cases reported since 869 on January 7, just as the third wave of the epidemic was slowing down.

Three more people succumbed to the virus, bringing the death toll to one-thousand-811.

Out of the new cases, 758 were local infections, of which about two thirds were in the Seoul metropolitan area.

Meanwhile, as of 10 a.m. Friday, at least 32 Navy sailors have tested positive onboard a naval ship traveling from Jinhae to Pyeongtaek, after an officer on the ship was confirmed infected.

The officer was tested after learning that a teacher at his child's daycare center contracted the virus. Forty-eight others on the ship tested negative, while four are still waiting for their results.

Navy Chief of Staff Adm. Boo Suk-jong convened an emergency meeting and heightened the social distancing level in the military branch to Two-point-Five for two weeks. This means sailors will be banned from taking vacations or off-installation trips.

All crew members onboard Navy vessels are undergoing tests as a preventative step and will be kept in isolation on their ships until the results are out.
Choi You Sun, KBS World Radio News.
Share
Print
List