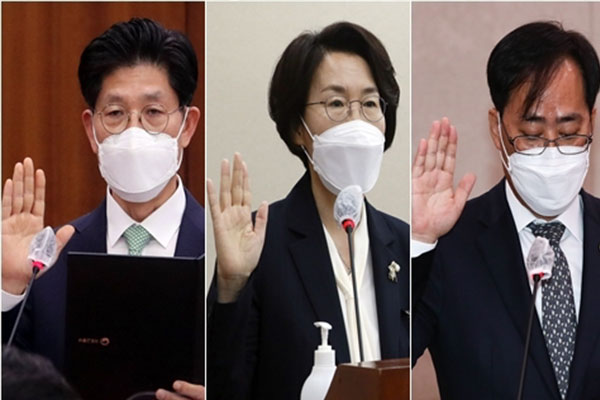 The main opposition is demanding that the three nominees either voluntarily resign or for President Moon Jae-in to withdraw their nominations.

The PPP accuses Lim of taking her family along on state-funded overseas business trips and plagiarizing from her student's thesis.

Noh is suspected of making a profit from selling an apartment unit he bought through a special program for public officials, while Park's wife allegedly evaded customs duty while bringing in high-end porcelain from Britain.

The PPP, meanwhile, decided to support the adoption of a hearing report for Labor Minister nominee An Kyung-duk. A report for Moon Sung-wook, the nominee for minister of trade, industry and energy, was adopted on Tuesday. President Moon appointed him as trade minister on Thursday.

The minor Justice Party also demanded nomination withdrawals for Lim and Park. It plans to state in the hearing report for Noh that he is unqualified.
Share
Print
List