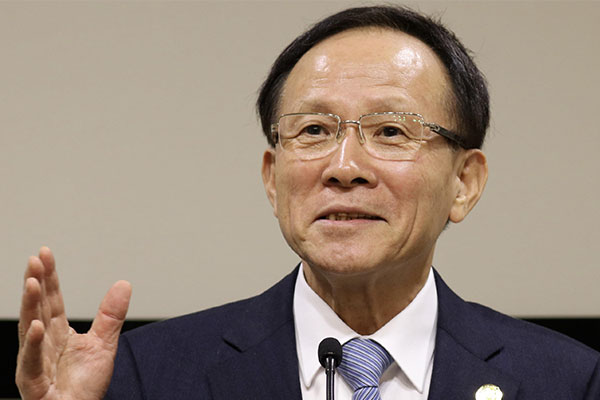 Anchor: South Korea's ambassador to the U.S. held an online media event on Monday, revealing the status of the Joe Biden administration's new approach to North Korea. He hinted that Seoul is seeking a breakthrough in the stalled nuclear negotiations with Pyongyang at the upcoming South Korea-U.S. summit later this month. This came as North Korea has reportedly acknowledged a U.S. invitation to explain the results of its recent policy review.
Kim Bum-soo has more.

Report: The South Korean Ambassador to the U.S. says Seoul is seeking to find a turning point in the long-stalled regional security issues at the upcoming summit between President Moon Jae-in and U.S. President Joe Biden.

In an online news conference with Korean correspondents in Washington on Monday, Ambassador Lee Soo Hyuck addressed the stalled nuclear negotiations between Washington and Pyongyang.

[Sound bite: South Korean Ambassador to the U.S. Lee Soo Hyuck (Korean-English translation)]
"Maximal efforts are under way to find solutions to long-pending regional issues of the allies at the upcoming summit. We anticipate that the upcoming talks will be the most practical and beneficial to national interests, as well as satisfying to South Korea and the U.S."

This came as Washington recently wrapped up its comprehensive North Korea policy review. The U.S. reportedly reached out to Pyongyang, offering to explain the Biden administration's position, and that the North confirmed it received that invitation.

Lee said that the U.S. consulted with South Korea throughout the review at various levels.

[Sound bite: South Korean Ambassador to the U.S. Lee Soo Hyuck (Korean-English translation)]
“As a result, we believe that a practical and substantial North Korea strategy has now been prepared, incorporating much of [Seoul's] position."
"In the process of the U.S.' implementation of North Korea policies, we will continue airtight collaboration with the U.S. administration using the existing diplomatic channels."

Moon and Biden are slated to hold their first summit at the White House on Friday next week.

Ahead of the talks, the South Korean envoy also noted that his embassy is doing all it can to ensure that the U.S. provides COVID-19 vaccines to South Korea before June.

Amid growing calls for faster vaccination at home, Lee said he is contacting the White House and the State Department and hearing from the U.S. government that they fully understand South Korea's situation.
Kim Bum-soo, KBS World Radio News.
Share
Print
List