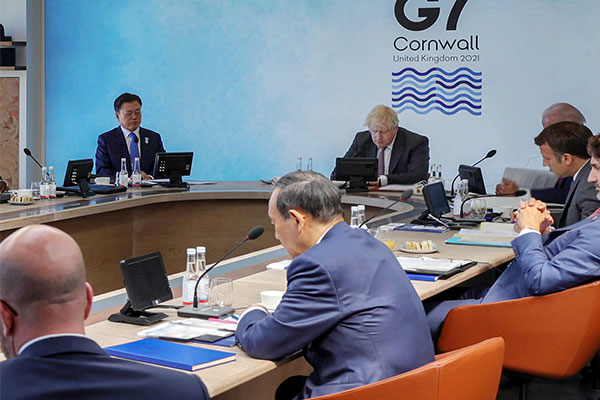 Anchor: Leaders of the Group of Seven(G7) nations and guest countries, including South Korea, held meetings in Cornwall, Britain, over the weekend. During the G7 talks, they agreed to work together to boost COVID-19 vaccine supplies for less developed countries while addressing a wide range of global issues, including North Korea.
Our Kim Bum-soo has wrapped up South Korean President Moon Jae-in's diplomatic engagements in this year's G7 as well as his state visit to Austria currently under way.

Report: The world’s wealthiest democracies have pledged to provide over one billion doses of COVID-19 vaccines to poorer nations, with half of them coming from the U.S.

After this year’s G7 summit in Cornwall, Britain on Sunday, U.K. Prime Minister Boris Johnson announced what he called "another big step towards vaccinating the world."

[Sound bite: UK Prime Minister Boris Johnson]
"I'm very pleased to announce that this weekend leaders have pledged over one billion doses, either directly or through funding to COVAX. That includes 100 million from the U.K. to the world's poorest countries, which is another big step towards vaccinating the world."

Wrapping up the weekend event, the G7 leaders adopted a joint communique, addressing a wide range of global issues, including North Korea.

While welcoming the U.S.' renewed commitment to engage diplomatically with North Korea, the G7 leaders called for complete denuclearization and demanded that Pyongyang "respect human rights for all."

On the sidelines of the multilateral gathering, Moon held talks with leaders from the U.K., France, Germany and Australia, as well as the European Union.

But the much anticipated South Korea-Japan summit did not take place despite the two sides' brief encounter amid strained bilateral relations. Sources said that Tokyo canceled a pull-aside meeting, which the two sides had agreed upon.

After wrapping up his stay in Britain, Moon continued on to a state visit to Austria. On Tuesday, Moon will then head to Spain for another three-day state visit.
Kim Bum-soo, KBS World Radio News.
Share
Print
List