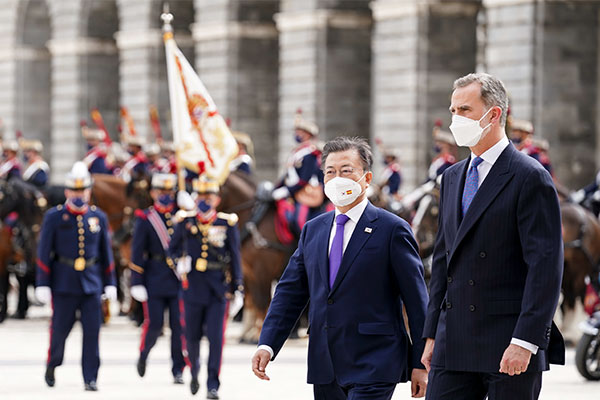 Anchor: President Moon Jae-in arrived in Madrid on Tuesday and began his state visit to Spain with a meeting with King Felipe the Sixth. During his three-day stay, the president will also meet with the Spanish prime minister and visit the Senate of Spain before attending a business leaders’ forum.
Our Bae Joo-yon has more.

President Moon Jae-in kicked off his state visit to Spain, the last leg of his three-nation European tour, by attending an official welcome ceremony hosted by King Felipe the Sixth.

Moon arrived in Madrid on Tuesday after wrapping up a three-day state visit to Austria and headed to the royal palace to meet with the Spanish head of state.

Later in the day, Moon visited Madrid City Hall, where Mayor José Luis Martínez-Almeida awarded him a golden key. The mayor said the key symbolizes the city's open doors, to which Moon said that with the key, South Korea will unlock the door to overcoming COVID-19.

The president then attended a welcome dinner hosted by King Felipe. The king said the South Korean film "Parasite" and K-pop boy band BTS are popular in Spain while Moon said Spanish food and football are popular in Korea.

On Wednesday, Moon will meet with Spanish Prime Minister Pedro Sánchez and discuss cooperation on COVID-19, customs and the economy, among other areas.

He will then visit the Senate of Spain after which he will attend a business forum in Barcelona.

Moon is also expected to call for the Spanish government’s support toward the Korean peace process.