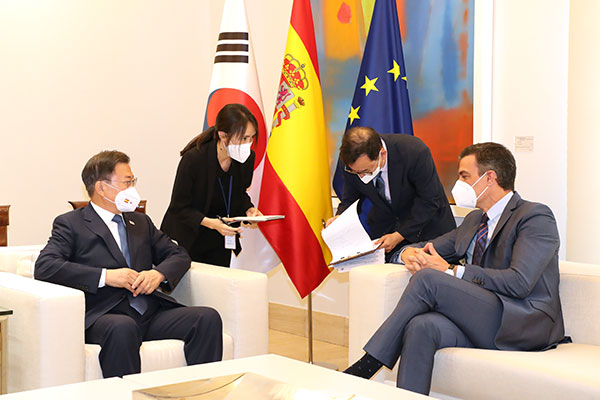 Anchor: The leaders of South Korea and Spain agreed to elevate the two countries' relations into a "strategic partnership" during President Moon Jae-in's state visit to the European country. Seoul and Madrid are expected to enhance cooperation in areas such as overseas construction and renewable energy.
Choi You Sun reports.

Report: President Moon Jae-in, who is on a state visit to Spain, agreed with Spanish Prime Minister Pedro Sanchez on Wednesday to upgrade the 71-year bilateral relations to that of a "strategic partnership."

In a joint statement, the two leaders agreed to expand cooperation in politics, the economy, global peace and security, science and technology, culture, education, sports, tourism and people-to-people exchanges.

[Sound bite: President Moon Jae-in (Korean-English translation)]
"I and the South Korean government are seeking a way to leap forward together and achieve inclusive recovery. I feel a sense of kinship and pride (with Spain) by the fact that both countries are overcoming the COVID-19 crisis with the power of solidarity and cooperation."

[Sound bite: Spanish Prime Minister Pedro Sanchez (Spanish-English translation)]
"This is the first official state visit that Spain receives since the pandemic, which notes the importance that we give to bilateral relations with the Republic of Korea. As we have been able to see during the day, our countries share the same vision of how to take on the great challenges that we are having to live. Now that we have overcome, we hope, the worst of the COVID pandemic, it is now the moment to reconstruct a better world and work together for the future that we want."

The leaders decided to push for South Korean and Spanish construction and infrastructure companies to launch more joint projects in third markets, especially in Asia and Latin America.

This comes as the two sides, combining Spain's capacity in planning and South Korea's strengths in construction, together have so far won 52 overseas orders, mostly in the Middle East, surpassing 16 billion dollars.

Moon and Sanchez also reaffirmed support for diplomatic efforts to achieve the complete denuclearization and establishment of lasting peace on the Korean Peninsula. They also agreed to jointly advocate for equitable access to COVID-19 vaccines.

​On the occasion of Moon's visit, Seoul and Madrid signed MOUs in the areas of green growth and digitization that are considered future growth engines, as Spain is a low-carbon producer with renewable energy taking up 40 percent of its energy mix.

Moon later delivered a speech at the Senate of Spain, where he said the two countries "surprisingly resemble" one another.

He explained that Spain is a "connective nation" that seeks to resolve international division through inclusion and coexistence, while South Korea is a "bridge nation" between advanced and emerging countries.