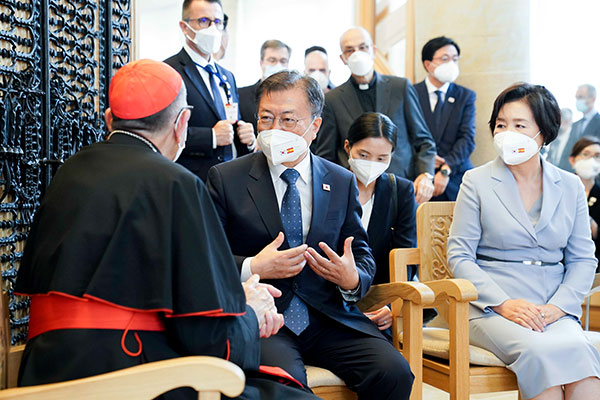 Anchor: President Moon Jae-in returned home on Friday from a seven-day three-nation European tour. Between tête-à-têtes with presidents and prime ministers, the Catholic politician also met with officials of the church to build interest toward Pope Francis’ possible visit to North Korea.
Our Bae Joo-yon has more.

Report: President Moon Jae-in returned home on Friday following a trip to the U.K. as a guest to the G7 and state visits to Austria and Spain. During his overseas tour, Moon also met with figures of the Catholic Church to foster interest toward a possible visit to North Korea by Pope Francis.

On his last day in Europe, Moon sat down for talks with Archbishop of Barcelona Cardinal Juan José Omella. During his visit to Austria, Moon visited the Heiligenkreuz Abbey where he expressed hope that Pope Francis will soon visit the North.

The idea is being revived after Pope Francis in October 2018 had expressed interest in visiting North Korea when Moon passed on a verbal invitation from North Korean leader Kim Jong-un.

Planning toward the trip, however, failed to move forward after dialogue with Pyongyang came to a stop. Nevertheless, the pope is said to be determined to make the visit.

Observers say the pope had such intent in mind when he named the now Archbishop Lazarus You Heung-sik, the head of the Catholic diocese of Daejeon, the new prefect of the Congregation for the Clergy of the Holy See last Friday.

Yoo has served as a bridge between the Vatican and the two Koreas and has visited the North on four occasions. He previously said that North Korea would gain significant benefit if the pope makes the visit.