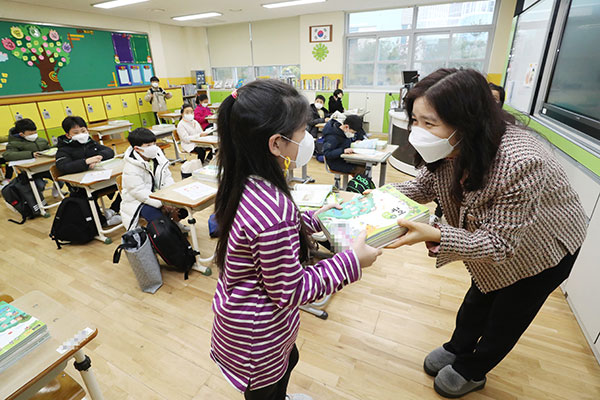 South Korea will allow most students to return to school for in-person classes in the fall semester.

Education Minister Yoo Eun-hye announced the plan on Sunday during a press briefing in line with the new social distancing system that will take effect from next month.

Under the lowest Level One in the revised four-tier system, all school children will be able to have offline classes from the second semester.

Under the new Level Two, schools are allowed to offer in-person teaching full-time, with attendance capped at two-thirds for middle and high schools and three-fourths for grades three to six at elementary schools.

Kindergartens and lower grades at elementary schools will be exempt from attendance requirements up until Level Three. Only at Level Four will all schools switch to full-time, virtual classes.

Under the new four-tier system, the lowest level will be imposed when the number of daily infections stays below 250 in the capital region and 500 nationwide.

Level Two will be implemented when the figures in the greater Seoul area surpass 250 and 500, and will be tightened to Level Three if the numbers exceed 500 and one-thousand. The highest level will be imposed when the number of cases surpasses one-thousand in the capital region and two-thousand nationwide.
Share
Print
List