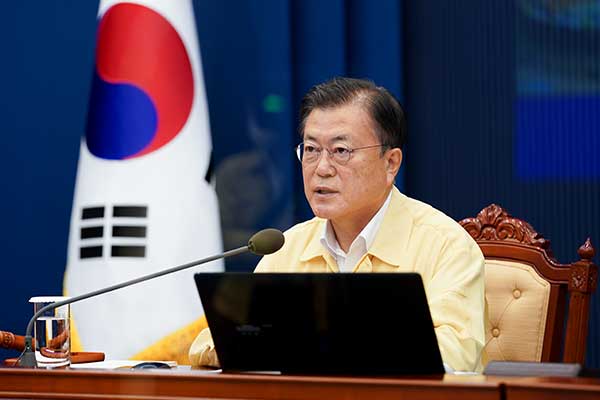 President Moon Jae-in has called for the speedy execution of the supplementary budget, with priority on supporting small business owners struggling because of pandemic restrictions.

Chairing a meeting of economy-related ministers on Thursday, Moon said that as private sector economic activities become more difficult due to antivirus measures, the government should be more aggressive in its fiscal policies.

He said it's imperative to quickly ease the suffering of small businesses and the socially vulnerable, and urged swift assistance, stressing that it's a matter of speed.

The president said long-term measures are also important and asked for the best preparations for a new compensation law to take effect in October.

On jobs, Moon called for expanded support for the travel and tourism sectors as well as youths, seniors and women.

He also cautioned against inflation and supply concerns related to economic recovery and the heat wave and stressed stability in consumer prices.
Share
Print
List