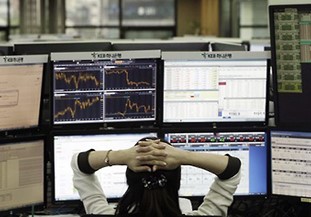 Foreign ownership of South Korean stocks fell to a five-year low last month due to continued sell-off by overseas investors.

According to the Korea Exchange on Sunday, foreign stock ownership of the country's main bourse KOSPI came to 34-point-12 percent of the bourse's market capitalization as of July 29.

Overseas investors dumped a similar amount of stocks in the first seven months of this year.

Foreigners net sold South Korean stocks every month this year except in April, when they net bought about 92 billion won.
Share
Print
List