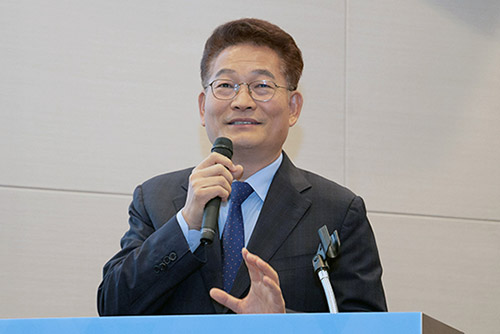 Head of South Korea's ruling Democratic Party (DP) has left for the United States for a six-day trip.

DP Chair Song Young-til plans to visit Washington to meet with American officials in charge of U.S. diplomacy and security policy, including White House coordinator for the Indo-Pacific, Kurt Campbell.

In the meetings with U.S. officials, Song is expected to discuss ways to enhance the South Korea-U.S. alliance and to resume the Korean Peninsula peace process.

Before departing for the trip at Incheon International Airport on Sunday, Song told reporters that he will meet with various U.S. officials and figures including congressional leaders, think tank officials and journalists.

Song said that he will exchange opinions with U.S. officials in order to find a breakthrough in the deadlocked relations and negotiations between the two Koreas and between North Korea and the United States.