Foreign Minister: No Need for S. Korea to Choose Between US, China 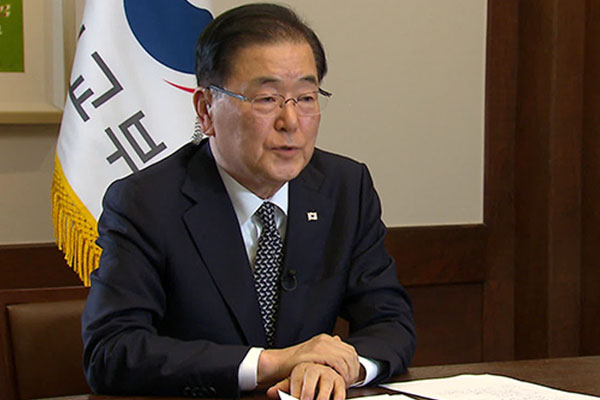 Foreign Minister Chung Eui-yong said there is no need for South Korea to choose between the U.S. and China and that Seoul is not being forced to do so.

Chung made the remark on Wednesday during a discussion organized by the Council on Foreign Relations when asked by CNN reporter Fareed Zakaria if there is a need for Seoul to choose one over the other.

Chung also said he doesn’t agree with the view that the Indo-Pacific is divided into a China bloc and non-China bloc and that the U.S., South Korea and Japan make up the latter. Chung then expressed hope that the U.S. and China will come to have a more stable relationship.

On North Korea, Chung said there is a need to propose a compensation plan to the North with snapback provisions in order to make headway in denuclearization and to consider easing sanctions on Pyongyang.

Chung said there is no need to be overly prudent in making the compensation offer to Pyongyang, adding that related efforts could start with providing humanitarian aid, which is less sensitive.
Share
Print
List