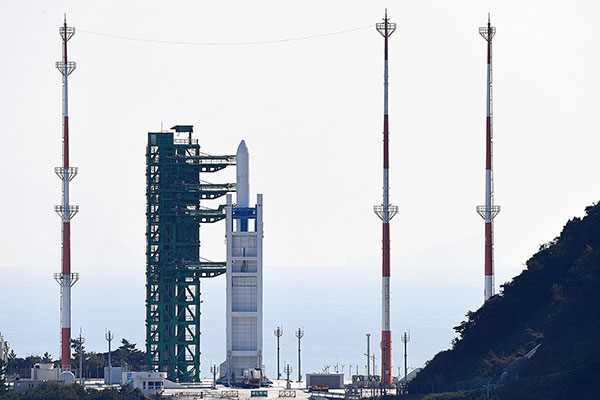 The country’s first domestically developed satellite launch vehicle will take off at 5 p.m. Thursday, an hour later than initially expected.

The committee tasked with the effort unveiled the final countdown for Korean Satellite Launch Vehicle Two, or Nuri, which will launch from the Naro Space Center in Goheung, 473 kilometers south of Seoul.

The committee, however, said the schedule may change if winds blowing ten kilometers above ground are stronger than the load that Nuri can withstand.

Nuri is a three-stage rocket that will place a one-point-five ton dummy satellite into a low earth orbit of 600 to 800 kilometers.

If launched successfully, South Korea will become the world’s seventh country with independent capabilities to launch a satellite into orbit from its own soil.

The Korea Aerospace Research Institute will be able to determine Nuri's success or failure some 30 minutes after takeoff. The success rate for newly developed rockets stands roughly at 30 percent.

Previous launches in 2009 and 2010 both ended in failure, but were followed by the successful launch of Naro in 2013, which has a first stage one rocket built in Russia.
Share
Print
List