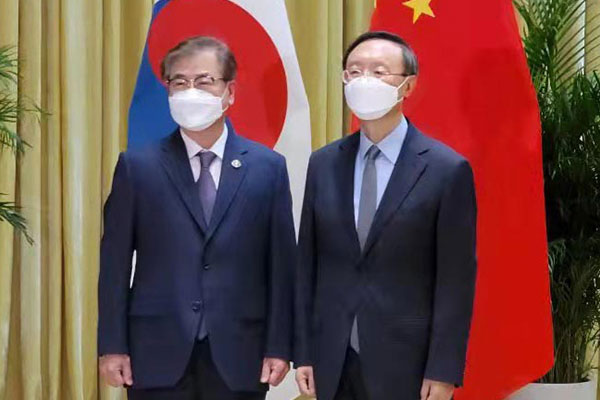 Yang Jiechi, a member of the Politburo of the Chinese Communist Party overseeing diplomacy, expressed his support for Seoul's push to declare a formal end to the Korean War, saying it will help promote peace and stability on the Korean Peninsula.

According to the presidential office on Friday, Yang made his remarks during talks and over dinner with National Security Adviser Suh Hoon in China's northern coastal city of Tianjin on Thursday that lasted nearly six hours.

The endorsement comes as South Korea and the U.S. have consulted on the matter as a political and symbolic step in bringing the North back to negotiations.

Suh and Yang agreed to enhance their strategic communication and cooperation, highlighting the importance of dialogue and diplomacy with North Korea in achieving the peninsula's denuclearization and establishment of the peace regime.

In regards to a stable management of the peninsula's security during the peace process, Yang said Beijing has consistently backed Seoul's efforts to improve inter-Korean relations.

The two sides also reconfirmed their joint push to arrange a visit to Seoul by Chinese President Xi Jinping once the spread of COVID-19 recedes in both countries.
Share
Print
List