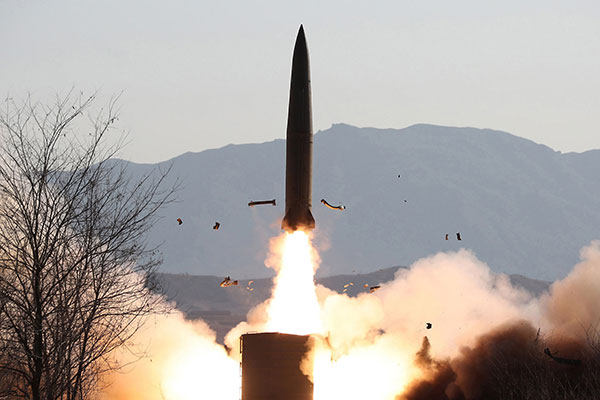 President Moon Jae-in has called for a stable management of the security situation on the Korean Peninsula after North Korea fired a pair of projectiles suspected to be ballistic missiles.

​Presidential spokesperson Park Kyung-mee said on Monday that Moon, who is amid a Middle East tour, ordered National Security Adviser Suh Hoon to oversee the situation, after being briefed on the situation. Moon is in the United Arab Emirates(UAE) as part of a 3-nation tour that is to run through Saturday.

Earlier in the day, the Joint Chiefs of Staff(JCS) said the North fired two projectiles suspected of being short-range ballistic missiles eastward from nearby the Sunan airfield in Pyongyang, marking the regime's fourth armed protest in the new year.

It comes just three days after North Korea had launched two suspected short-range ballistic missiles into the East Sea, which it later claimed were guided missiles fired by a railway-borne regiment.

The revelation of Moon's order from overseas is an apparent reflection of the president's grave view of the situation, as his administration had pushed to resume peace dialogue with Pyongyang before the end of his five-year term in office in May.

Meanwhile, members of the National Security Council's standing committee held an emergency meeting on Monday to discuss the North's latest launches, which they assessed as a "continuation of very regrettable situations."
Share
Print
List