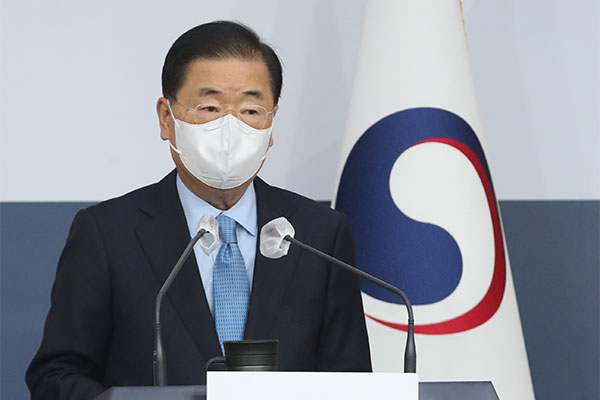 Foreign Minister Chung Eui-yong said on Monday that two of the nine South Koreans found to have entered Ukraine since early this month remain unaccounted for.

Chung shared the information during a meeting of the National Assembly’s Foreign Affairs and Unification Committee.

He said three of the South Koreans returned from Ukraine while the six others are presumed to be residing in the country.

The minister said four of them, including a woman who is helping Ukrainian civilians, stay in contact but the whereabouts of the two others are unknown, adding the government is doing its best to find them.

A Seoul foreign ministry official had earlier said nine South Koreans were presumed to be in Ukraine after traveling to Ukraine after March 2, including well-known YouTuber and former Navy special warfare officer Rhee Keun. The official surmised that most of them went to join an international legion to fend off Russia's invasion of Ukraine.
Share
Print
List