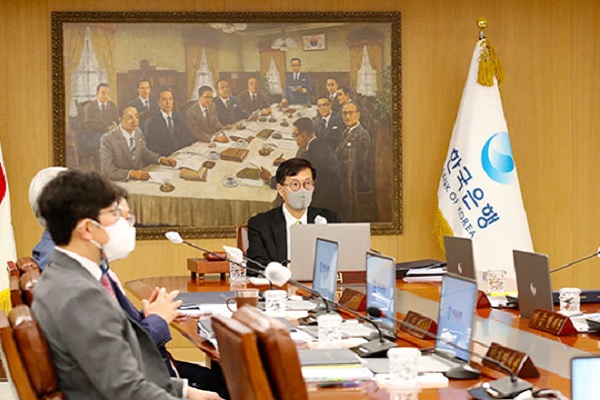 Bank of Korea(BOK) Governor Rhee Chang-yong has hinted at additional rate hikes, saying that the central bank's monetary policy will focus on tackling inflationary pressure in the coming months.

The governor’s remarks followed a rate-setting meeting on Thursday, in which the board raised key interest rate by a quarter percentage point to one-point-75 percent. The BOK also sharply raised its consumer price growth forecast for this year to the four-percent range.

Rhee refrained, however, from specifying precisely when the rate would increase again, saying the timing will depend on analysis of related data, such as the consumer price growth rate in May which is expected to hit the five-percent range, as well as the U.S. Federal Reserve’s announcement.

He projected the inflation rate to surge over five percent for the time being, and hover around three to four percent through early next year amid increased spending from eased social distancing and large-scale investment plans announced by top conglomerates.

He assessed that the current inflation risk is high, remarking that it would be imprudent to rule out the possibility of prices peaking in the latter half of this year, instead of the first half.
Share
Print
List