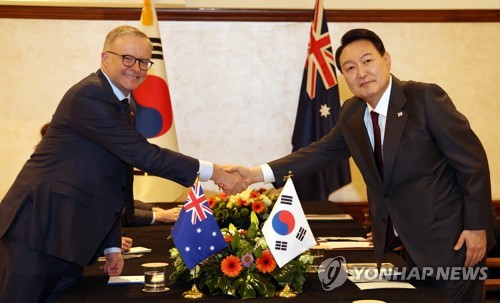 President Yoon Suk Yeol met with Australian Prime Minister Anthony Albanese on Tuesday and discussed cooperation between the two countries and the values they share, including democracy.

Seoul’s presidential office said on Wednesday that Yoon sat down with Albanese in Madrid for the first in a series of summit meetings he is scheduled to attend this week after arriving from South Korea on Monday.

Yoon is on a five-day trip to Spain to make his global diplomacy debut at the North Atlantic Treaty Organization(NATO) summit set to be held on Wednesday and Thursday. South Korea and Australia are not NATO members but have been invited as Asia-Pacific partners along with Japan and New Zealand.

According to the presidential office, Yoon and Albanese shared their commitment to cooperation on energy and climate change. Yoon particularly expressed his hope that South Korean companies will participate in the green hydrogen sector in which Australia has demonstrated prowess to jointly cope with climate change.

The two leaders also discussed North Korea's nuclear weapons program, with Albanese reaffirming Canberra’s will to actively cooperate on the denuclearization of the North and a peace policy on the Korean Peninsula while continuing to strictly impose economic sanctions on Pyongyang.

Yoon also called for Australia’s support for Busan’s bid to host the 2030 World Expo, to which Albanese responded he would make “appropriate considerations.”
Share
Print
List