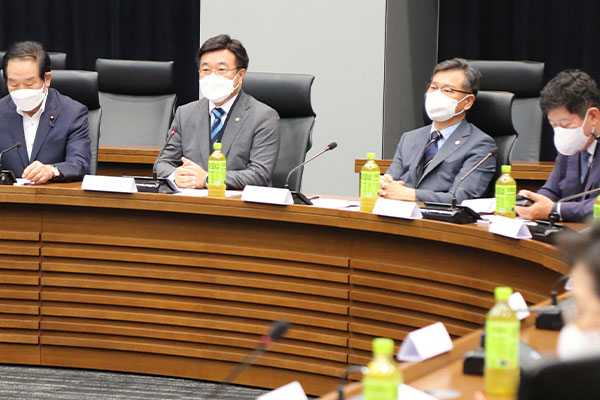 South Korean lawmakers from the Korea-Japan Parliamentarians Union have expressed deep regret over a remark by Seishiro Eto, a Japanese politician of the ruling Liberal Democratic Party that disparaged the nation.

Rep. Yun Ho-jung of the main opposition Democratic Party said the remark is "very regrettable" while speaking to Korean reporters in Tokyo on Friday.

According to the Asahi Shimbun newspaper, Eto, a 13-term veteran lawmaker, said during a ruling party meeting on Thursday that "Korea is like a brother country to Japan but to be more exact, Japan is the much older brother."

When asked to further elaborate, Eto mentioned Japan's colonization of Korea in the past.

A South Korean delegation of the parliamentarians union led by Yun arrived in Tokyo on Wednesday and held talks with their Japanese counterparts on Thursday.

Yun said that during the talks, they told Japanese lawmakers that there can be no backpedaling when it comes to an accurate perception of history.

On whether the parliamentary group will request an apology, Yun said it's difficult to give his personal opinion and a decision will be made after consultations.
Share
Print
List