Pres. Yoon Says He Will Maintain Original Intentions for Presidency 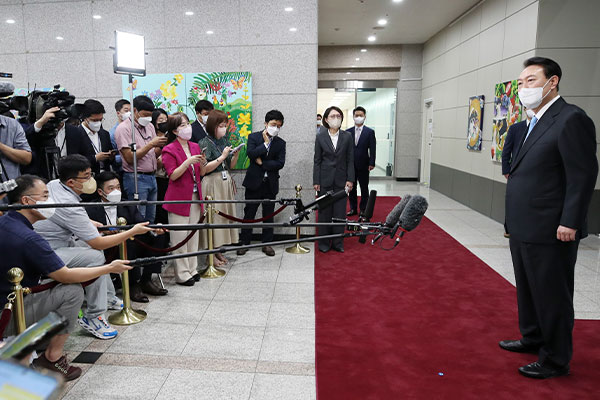 President Yoon Suk Yeol says that reflection reaffirmed his view that what he needs to do for the people is to closely look after them and uphold their wishes while maintaining his original intentions for his presidency.

Yoon made the remark on Monday before entering the presidential office when asked by reporters to comment on returning to work after his summer vacation.

Yoon said he looked back on his presidential campaign and the months that followed his inauguration and came to conclude that the people raised him up. He said he came to once again appreciate the public for both their harsh criticism and encouragement.

Asked to comment on reports that education minister Park Soon-ae may voluntarily step down, Yoon said he will review all pending issues from the perspective of the people.

The president’s question-and-answer session with reporters on his way to work on Monday was the first in 13 days following Yoon’s extended schedule taking him outside the presidential office and his summer vacation.
Share
Print
List