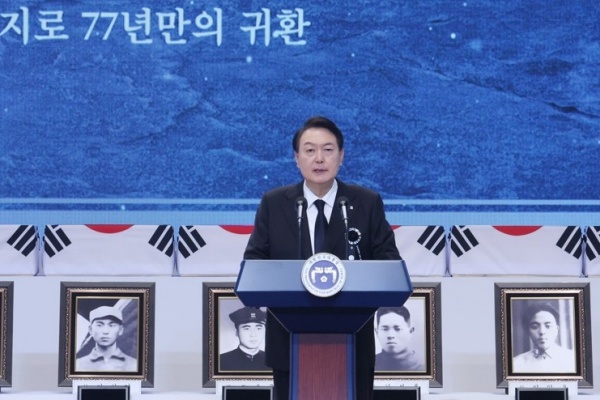 The floor leader of the main opposition Democratic Party has issued criticism of President Yoon Suk Yeol's Liberation Day speech given the day before, saying it failed to meet public expectations.

At a party meeting on Tuesday, Park Hong-keun said that Yoon's message, in which the president referred to Japan's colonial rule of the Korean Peninsula as a political rule, was directed toward Tokyo and not the South Korean people.

Park noted that while Yoon neglected the issues of Japan's wartime forced labor and sexual slavery, Japanese Prime Minister Fumio Kishida and other political leaders made offerings to or visited the Yasukuni war shrine, a memorial that counts over one-thousand convicted war criminals among those honored.

He stressed that Seoul and Tokyo's 1998 joint declaration was based on an expression of sincere regret and apology on the part of Japan. In apparent reference to Japanese leaders’ latest visit to the controversial shrine, the floor leader cast concerns that efforts by the Yoon government to improve bilateral ties without principle or public support would only send the wrong signal to Tokyo.
Share
Print
List