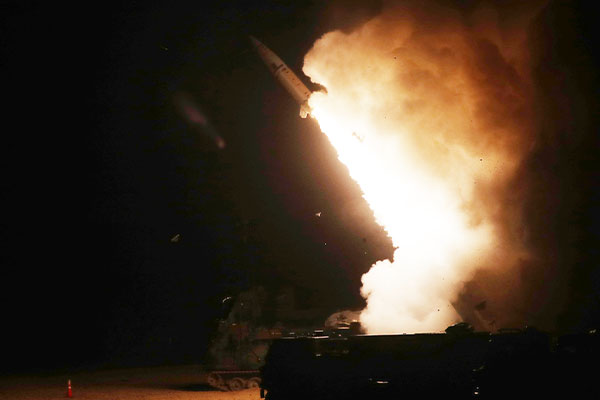 Anchor: South Korea and the United States have responded to North Korea’s missile provocation on Tuesday with their own launch of four ground-to-ground missiles into the East Sea. The allied forces also scrambled jets the previous day, dropping guided bombs on targets off the western coast. The nuclear-powered USS Ronald Reagan was also rerouted to return to the East Sea in an apparent warning to Pyongyang.
Kim Bum-soo has more.

After four ATACMS(Army Tactical Missile Systems) guided missiles hit targets in the East Sea, the South Korean JCS said that the allied forces are capable of neutralizing the enemy's origin of attack.

The South Korean military also fired its own Hyunmoo-2 strategic missile but the projectile failed to reach its intended trajectory and fell inside the base.

After participating in massive combined drills last week with South Korean and Japanese warships near the Korean Peninsula, the nuclear-powered USS Ronald Reagan supercarrier was also rerouted to return to the East Sea, according to the South Korean military.

Amid rising concerns of a seventh underground nuclear test, North Korea on Tuesday conducted an intermediate-range ballistic missile launch and forced the government of Japan to issue an emergency alert in its northern region.

Following the trajectory over Japan, the projectile, presumed to be the nuclear-capable Hwasong-12, flew four-thousand-500 kilometers, the longest for a North Korean ballistic missile to-date.