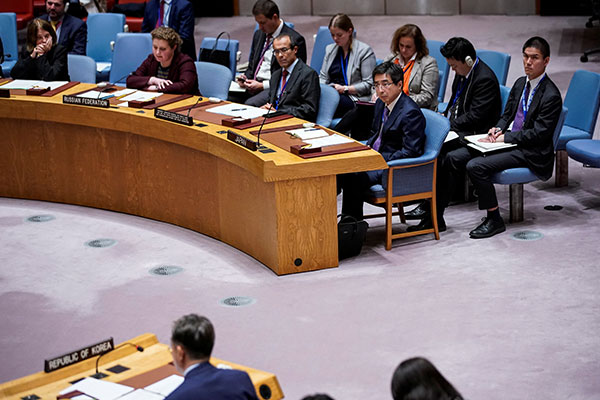 The United Nations Security Council(UNSC) failed to reach an agreement on a response to North Korea’s firing of an intermediate-range ballistic missile during a meeting on Wednesday.

In opening remarks which were public, the United States and most other UNSC members called for stern measures against the North's provocation, pointing out that the missile launch was a violation of existing UNSC resolutions.

Council member states China and Russia, however, defended North Korea and insisted that U.S.-led military exercises in the region provoked the North, resulting in a lack of agreement by the council.

After the stalemate session, the U.S., South Korea, Japan and some of the UNSC members issued a statement read by U.S. Ambassador to the UN Linda Thomas-Greenfield condemning the North’s recent series of ballistic missile launches.

It said that the North's ballistic missile launches are in violation of multiple UNSC resolutions and pose a threat to the region and the international community, adding that the countries joining the statement remain committed to diplomacy and urge the North to return to dialogue.