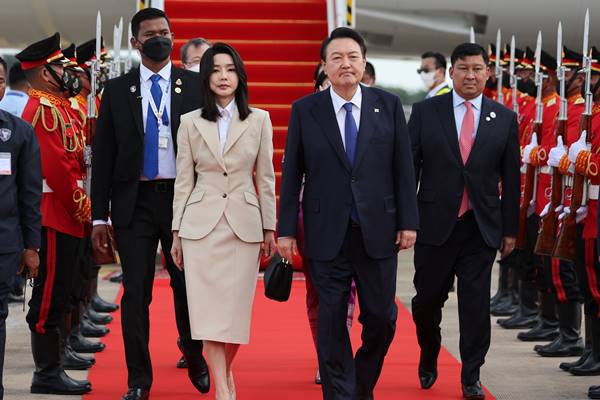 President Yoon Suk Yeol presented his Indo-Pacific strategy during his meeting with the leaders of the Association of Southeast Asian Nations Summit on Friday, referring to ASEAN nations as its most important collaborative partner in its strategy.

Yoon unveiled the strategy founded on freedom, peace and prosperity during the South Korea-ASEAN summit in Phnom Penh, Cambodia, on Day One of his first trip to the Southeast Asian region since taking office in May.

The first principle the South Korean leader presented in his regional initiative is the rules- and universal values-based international order. Noting that forcible unilateral changes of the status quo should not be allowed, Yoon said Seoul will actively try to prevent disputes and armed conflicts based on rules and ensure the principle of peaceful resolution through dialogue.

He also pledged to strengthen cooperation with members of the region in various fields including nuclear nonproliferation, counter-terrorism, and maritime security, cyberspace and healthcare.

Seoul will also contribute to the region’s joint prosperity through open and fair economic orders, he said, promising efforts to strengthen economic security by enhancing the resilience of supply chains and help create a cooperative and inclusive economic-technological ecosystem.

Yoon also emphasized South Korea’s commitment to actively engage in contributive diplomacy regarding climate change, digital gap and healthcare. Noting his Indo-Pacific strategy substantially corresponds to the ASEAN’s perspectives on the region, he stressed the ASEAN is Seoul’s most important cooperative partner in its push.

The South Korean leader unveiled the regional initiative following efforts by his administration to explore South Korea’s extended roles in the Indo-Pacific amid a tug-of-war in the region between the U.S. and China. Yoon is slated to hold a trilateral summit with U.S. President Joe Biden and Japanese Prime Minister Fumio Kishida on the sidelines of multilateral meetings over the weekend.

He will also sit one-on-one with Biden to discuss North Korea and other pressing issues.

Yoon will then head to Indonesia on Monday to attend the Group of 20 summit in Bali.
Share
Print
List