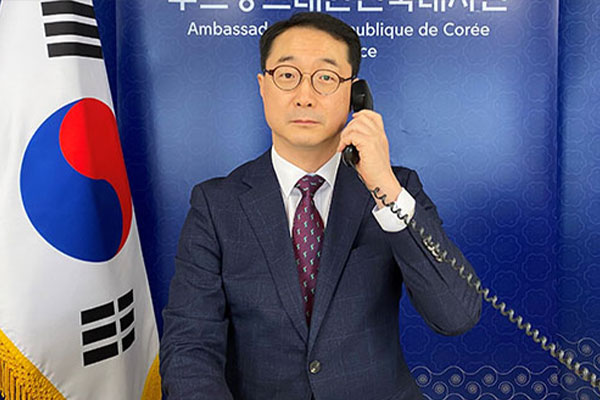 South Korea's nuclear envoy Kim Gunn spoke on the phone with Chinese and Russian ambassadors on Monday to ask for their cooperation at the United Nations Security Council in efforts to hold North Korea accountable for its mounting provocation.

The phone calls came as the UN Security Council is set to hold an open meeting on Monday to discuss the North's launch of an intercontinental ballistic missile(ICBM) on Friday toward the East Sea. South Korea will also attend the meeting as an interested party.

In the talks, the South Korean nuclear envoy reportedly denounced the North's ICBM launch as a clear violation of UN Security Council resolutions and grave provocation posing serious threat to peace and stability of the Korean Peninsula, Northeast Asia and the world.

Kim then asked for active cooperation from China and Russia, permanent members of the Council, to pave the way for the international community to take stern measures against the North's aggression.

The ministry said the ambassadors agreed on the importance of peace and stability on the peninsula and in the region and reaffirmed their position that they will play constructive roles in seeking a peaceful resolution to Peninsula issues.
Share
Print
List