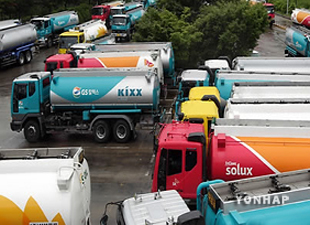 As more and more gas stations run out of fuel due to supply disruptions amid a nationwide strike by unionized truckers, the government is considering issuing a return-to-work order for drivers in the oil industry.

The Ministry of Trade, Industry and Energy announced on Thursday that a meeting was held to start preparations for the order to be applied to four major oil refineries as well as the Korea Petroleum Association, the Korea Oil Station Association and the Korea National Oil Corporation.

The ministry said that the meeting participants assessed losses incurred by the oil industry and discussed response measures, announcing that it had secured alternative means of transport for oil, including five military tankers and 29 agricultural and fishery tankers.

As of 8 a.m. Thursday, 33 gas stations nationwide had run out of fuel, with the largest concentration in the Seoul metropolitan area.
Share
Print
List