S. Korea, 8 Other Nations Condemn Violence against Protesters in Iran 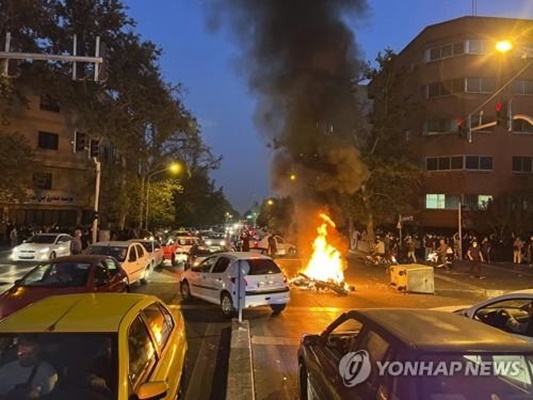 South Korea, the U.S. and seven other countries have issued a joint statement condemning Iran's crackdown on protests by its citizens that first began in the wake of a female university student's death after she was seized by the country's “morality police.”

The two nations’ foreign ministers co-signed a statement on Thursday with the top diplomats of Australia, Britain, Canada, Chile, Iceland, New Zealand and Sweden calling attention to the extreme violence faced by the courageous Iranian women and girls leading sustained nationwide protests over the tragic death of 22-year-old Mahsa Amini.

The nine members of the Global Partnership for Action on Gender-Based Online Harassment and Abuse argued that Iranian authorities are using social media and other online platforms to coordinate harassment, abuse and disinformation campaigns against women and girls protesting Amini's death.

They said that such use of violence, manifesting both online and offline and exacerbated by the scale, speed and reach of technology platforms, is a deliberate tactic leveraged by illiberal actors around the world seeking to halt democratic movements and buttress their own political power.

The statement called on the international community to join the group’s efforts with technology firms to exhaustively attempt to ensure that women and girls have access to information online, particularly the full and effective use of online platforms.

They said the global partnership for action stands in solidarity with Iranian women and girls and will continue to look for ways to support them globally to freely and safely exercise their rights, both on and offline.

Amini died in the hospital in September after being violently detained by Iran's “morality police” for not wearing a hijab. Her death prompted nationwide protests.
Share
Print
List