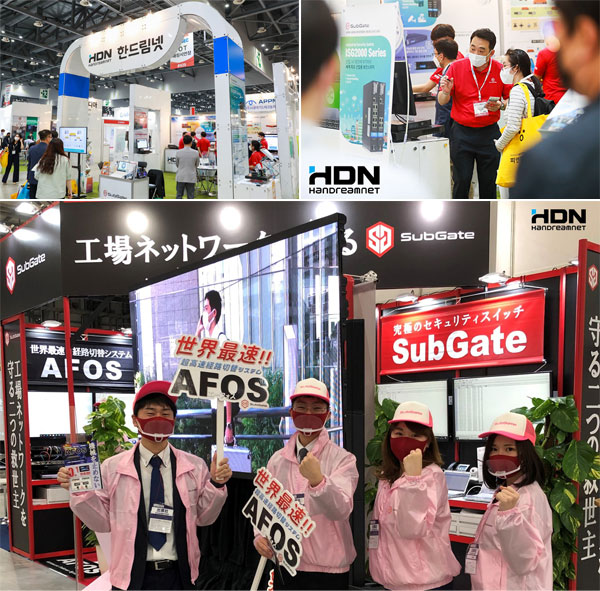 We develop and manufacture network equipment, and we produce security switches as well—security switch hubs, to be more specific. A switch hub is simply called a switch in the IT sector. They’re necessary for Internet access in an office environment. Conventional switch hubs are vulnerable to cyber attacks, which cause network slowdown. And sometimes, cyber attacks occur from the inside. Security switches can automatically filter out those internal attacks.

Firewalls can prevent malicious software from accessing a network from outside. But solutions like these have limitations in managing problems that occur inside the network.

The company developed and commercialized the world’s first network security switch in 2007. Named “SubGate,” the solution detects and blocks security threats that may occur in internal networks. By blocking harmful traffic and preventing its spread, it stabilizes network services. Users can protect the internal network from various security threats simply by changing a switch, without having to alter the network.

Basically, our solution enables communication between different networked devices. In addition, it blocks unnecessary, malicious traffic and informs the manager of the network situation. Regular switches do not have this feature. Let me explain it in this way. They are like ordinary cars that can simply run. But our solution is like a semi-self-driving car equipped with a feature that automatically detects and blocks internal threats.

It obtained a certificate confirming security features from the National Intelligence Service, becoming the first such company in the industry. The certificate is issued by certified testing institutes for IT products, including information protection systems and network equipment. The institutes evaluate whether the products meet certain security requirements to ensure their safety. If a company gets the certificate issued, it can provide its products to the government and public institutions without undergoing separate security evaluations.

We’ve provided our solutions to public institutions for a long time. Foreign brands are available, but our products are by far the best domestically speaking. We’ve also partnered with companies in other countries to create a win-win model. We entered the Japanese market in 2009 and operated a branch there for two and a half years. In 2011, we turned it into an overseas corporation with 18 employees. Last year, we posted sales worth 9 million US dollars in Japan. This year, too, we’ve recorded steady sales growth.

With network environments changing fast, it is necessary to manage networks more meticulously and systematically. In the Internet of Things or IoT era that connects mobile devices and electronic machines such as refrigerators and washing machines, networks are becoming increasingly complicated. As a result, new types of security threats are becoming even more serious and malicious.

HanDreamnet has successfully built a lineup of some 50 network security switches for new and different network environments such as cloud, IoT, smart office and wireless LAN. That is, the company provides a network security solution optimized for each user environment.

Our main products are security switches, including those used in office networks and switches for industrial purposes. Previous industrial switches lacked the security element. We also offer the Whitelist-based security switch that can be used in an IoT environment. We continue to expand investment in R&D as well as in human resources and facilities.

HanDreamnet won an award from the Minister of Science and ICT last year, in recognition of its contribution to securing competitiveness in the domestic network equipment market dominated by global firms.

This year, it was selected as one of the global, small, yet powerful companies of Korea, by the Ministry of SMEs and Startups. The ministry designates 200 small firms with innovative technology and growth potential and nurtures them into leading global companies. HanDreamnet was the only company in the field of information security and network switches to make it on the list.

The company has made steadfast efforts to explore overseas markets, including Japan, to demonstrate Korea’s network equipment technology and reliability to the global market.

There are so many client companies that we can’t even count them. They are numerous in South Korea, of course, and in Japan. We’ve made switches over the last 14 years since we first produced them in 2007, releasing 20-thousand units each year on average. That amount is pretty staggering. We hope that our sales will increase two to three times so we can share the fruit with our employees and make them happy, both materially and mentally. That’s our goal.

HanDreamnet established an R&D center in 2019 and expanded technological cooperation with outside institutions. We can see the company has secured technological prowess ahead of others through constant R&D efforts.

The network security industry is faced with a major challenge, due to growing demand for non-face-to-face services amid the COVID-19 pandemic. Despite the increasingly advanced security threats, safe and stable network environments are being created in IT powerhouse Korea, thanks to HanDreamnet.