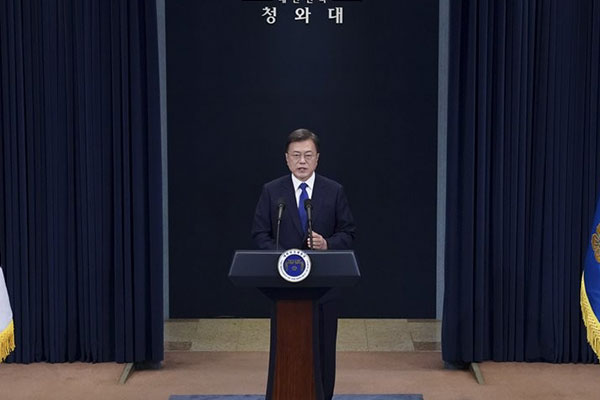 President Moon Jae-in vowed to spend his final year in office taking a final opportunity to turn the Korean Peninsula's incomplete peace to one that is irreversible.

Addressing the nation to mark the fourth anniversary of his presidency on Monday, Moon said a long period of deliberation is nearing an end and that time has come to take action.

He welcomed the Joe Biden administration's recent North Korea policy review, assessing that the policy will seek to resolve North Korea's nuclear issue based on the 2018 Singapore Declaration, achieving the peninsula's complete denuclearization.

The president said Washington will address the issue through diplomacy, with flexibility and a progressive and practical approach.

Ahead of his first summit with Biden on May 21, Moon pledged to solidify the alliance and further coordinate North Korea policy so that dialogue between Washington and Pyongyang, as well as the two Koreas, can swiftly resume.

In an apparent reference to Seoul's ban on anti-Pyongyang leaflet activity, Moon said acts that violate inter-Korean agreements and current laws, thereby impeding the advancement of inter-Korean ties, are undesirable.

He added that the government has no other choice but to sternly enforce the ban.
Share
Print
List