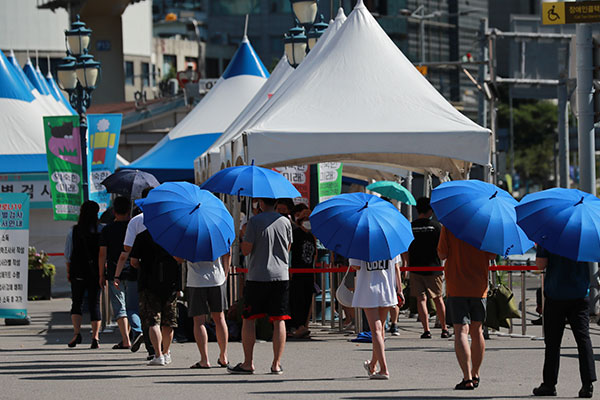 One-thousand-252 new COVID-19 cases were reported on Monday, staying over the one-thousand mark for the 13th straight day.

The Korea Disease Control and Prevention Agency(KDCA) said Monday that the new infections detected throughout Sunday raised the country's accumulated caseload to 179-thousand-203.

The daily tally dropped by over 200 to fall below 13-hundred, apparently due to fewer tests over the weekend. It is the highest Sunday figure so far, replacing the previous record of eleven-hundred tallied last Sunday.

Of the new cases detected throughout Sunday, one-thousand-208 were local transmissions and 44 were from overseas.

By region, the greater metro area accounts for 67-point-one percent of domestic cases including 413 in Seoul and 336 in Gyeonggi Province.

Other parts of the nation added 397 infections, or 32-point-nine percent of local cases. The ratio topped 30 percent for the second straight day to hit a record high for the fourth wave of the pandemic.

One more death has been reported, raising the death toll to two-thousand-58. The fatality rate stands at one-point-15 percent.

The number of critically ill patients has dropped by two from the previous day to 185.
Share
Print
List