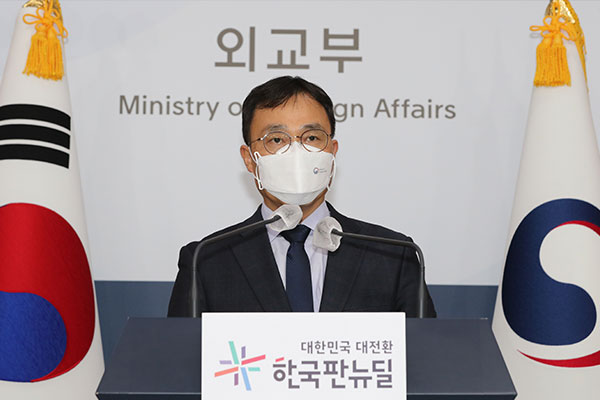 Seoul has reiterated its expectations for the 2022 Beijing Winter Olympic Games after Washington announced its decision to diplomatically boycott the upcoming event in protest of human rights issues in China.

Foreign Ministry Spokesperson Choi Young-sam said in a regular media briefing on Tuesday that the South Korean government hopes the Games in Beijing will contribute to peace and prosperity of Northeast Asia and beyond and help boost inter-Korean relations.

White House spokesperson Jen Psaki said on Monday that the Biden administration will not send any diplomatic or official representation to the 2022 Winter Olympic and Paralympic Games, citing China's alleged genocide and crimes against humanity in Xinjiang and other human rights abuses.

China then slammed the U.S. decision, calling it “a grave travesty of the spirit of the Olympic Charter and a blatant political provocation.”

Amid speculation the U.S. may seek its allies to join the move, Choi said there was no such demand when Seoul was informed of the U.S. decision in advance through diplomatic channels. South Korea, as its traditional ally, stood alongside the U.S. when it fully boycotted the Summer Games in Moscow in 1980, protesting the Soviet Union's military presence in Afghanistan.

The U.S. said it is not trying to make countries choose between Washington and Beijing. Pentagon press secretary John Kirby pointed out during a Monday briefing that the U.S. respects the relations between South Korea and China and understands that they are neighbors.

It is as yet unclear how the U.S. move will affect Seoul’s push for a formal end to the Korean War as the Moon Jae-in administration was hoping to promote the effort during the Beijing Olympics.
Share
Print
List