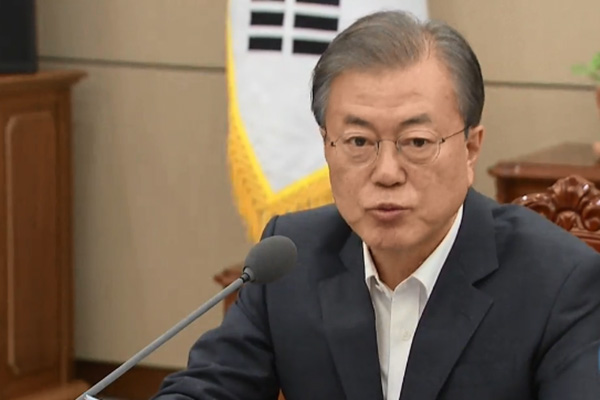 Anchor: President Moon Jae-in has apologized and expressed remorse for failing to fulfill a campaign pledge to raise the minimum wage to ten-thousand won an hour by 2020. Opposition parties, meanwhile, jumped on the opportunity to criticize the administration's decision to stick to its income-led economic growth strategy.
Celina Yoon has more.

Report: President Moon Jae-in said he is sorry for failing to keep a campaign pledge to raise Korea’s minimum wage to ten-thousand won within three years of taking office.

The message, which he delivered to staff in a meeting late last week, was transmitted publicly on Sunday through his chief of staff for policy Kim Sang-jo.

According to Kim, the commission concluded that Korea’s anemic economic conditions made it difficult to replicate the kind of double-digit minimum wage increases voted for the past two years.

Their decision also makes it a virtual impossibility that Moon’s goal of a ten-thousand won hourly wage threshold will be realized by 2020.

Kim told reporters that minimum wage hikes over the past two years -- 16-point-four percent and ten-point-nine percent, respectively -- have had positive impacts on the job market, but admitted the higher wage has burdened some employers.

The president's policy chief stressed that the administration’s income-led economic growth strategy remains alive and that it not only includes raising wages but also lowering living expenses and expanding social safety net programs.

The opposition, however, criticized the administration for sticking to its income-led growth strategy.

The main opposition Liberty Korea Party said the Moon administration has not fully reflected on what it described as an economic policy failure. The minor opposition Bareunmirae Party added that Kim's briefing only proved the “stubbornness” of the president.

The commission will submit its decision to the Labor Ministry, which has until August fifth to finalize the rate. In the interim, those unsatisfied with the vote can protest the decision with the minister, who may choose to request that the commission reconsider the minimum wage rate.
Celina Yoon, KBS World Radio News.
Share
Print
List