Text and video for news, current affairs, entertainment and other KBS WORLD Radio programs in 11 languages are provided.

Contents of interest can be bookmarked under “Saved Contents” for future viewing.

On-Air app is specifically designed for quick and easy access to audio services for KBS WORLD Radio programs in 11 languages.

Provides broadcast times for each language on Win.K 11, Win.K MUSIC.

Listen again to the latest special programs and past programs for each language.

Favorite On-Air channels can be bookmarked. 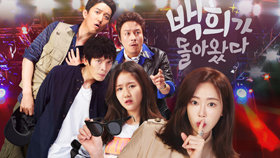