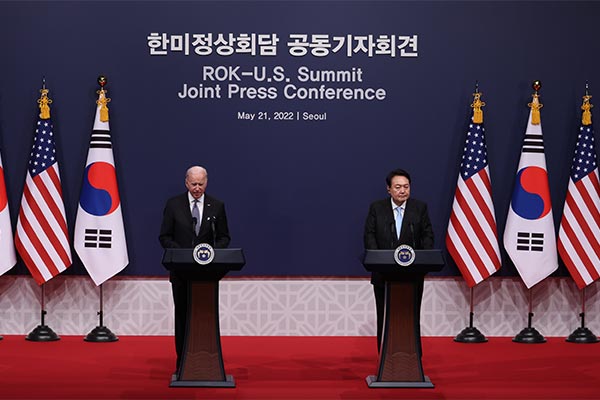 With North Korea and economic security dominating the agenda, the two leaders said they discussed ways to implement the shared goal of developing the bilateral alliance into a comprehensive global strategic alliance.

They also reaffirmed the goal of achieving the complete denuclearization of North Korea while noting the door to dialogue remains open.

The two sides said that if Pyongyang takes practical steps toward denuclearization, bold plans will be prepared with the international community to improve the North Korean economy.

They also reiterated their intent to provide humanitarian support as the North grapples with a COVID-19 outbreak.

On defense, the two sides agreed to launch talks on expanding joint military exercises and reactivate the Extended Deterrence Strategy and Consultation Group (EDSCG) which was suspended in 2018.

The U.S. reaffirmed its commitment to deploying strategic assets if necessary in a timely and coordinated manner. The allies will also expand cooperation in dealing with cyber threats from North Korea including state-sponsored cyber attacks.

On economic security, the two sides will step up cooperation through frequent communication and a new dialogue channel on supply chains and cutting edge technology.

South Korea has also formally confirmed its participation in the U.S.-led initiative known as the Indo-Pacific Economic Framework (IPEF).

The summit went longer than the scheduled 90 minutes, lasting about two hours.

It consisted of a small group meeting, a one-on-one and an extended meeting involving eleven officials from each side.

At the meeting, President Yoon said the Korea-U.S. alliance must also evolve in a way fitting for an era of economic security.

Biden said the alliance served as a linchpin for peace and prosperity in the region for decades and also played an important role in deterring North Korean threats.

Biden thanked Yoon for the warm hospitality and invited him to Washington at a time that is convenient for both sides.

In the evening, an official banquet will be held at the National Museum of Korea attended by the two presidents and key government and business officials.

On Sunday, Biden, alongside Yoon, will visit the Korean Air and Space Operations Center in Osan, Gyeonggi Province, wrapping up his three-day visit to Korea. He will then leave for Japan.
Share
Print
List