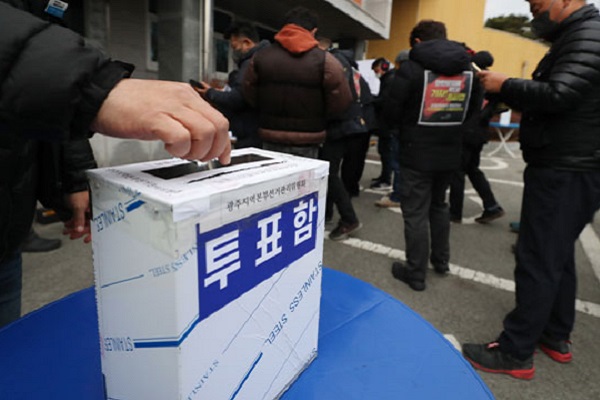 Anchor: Unionized truckers have voted to end their 16-day walkout that aimed to secure a more permanent and expanded minimum pay system before it expires on December 31. The decision comes in the wake of the government's zero-tolerance policy that led to return-to-work orders as well as a lack of public support.
Choi You Sun reports.

Report: The Cargo Truckers Solidarity under the Korean Confederation of Trade Unions voted on Friday to call off a general strike that began on November 24.

According to the union's North Jeolla chapter on Friday, a majority of voting members were in favor of ending the walkout.

The lower-than-expected voting rate seemingly reflects a majority members' fatigue from the 16-day walkout. The truckers were seeking to extend and expand in scope the nation’s freight rates system that encourages safe driving by guaranteeing minimum rates.

The current system, which only covers container and cement trucks, is set to expire by the year's end.

The protracted labor action likely resulted in losses in shipments worth one-point-three trillion won and two-point-six trillion won for the nation's steel and petrochemical industries, respectively.

Citing concerns over the strike's impact on the local economy, the government had issued return-to-work orders for drivers hauling cement, steel and petrochemical products.

The union's failure to sway public sentiment amid concerns over distribution disruptions on top of soaring energy costs and high interest may also have pushed union members to end the collective action.

In a Gallup Korea survey of one-thousand adults nationwide from Tuesday to Thursday, only 21 percent of respondents supported the strike, while 71 percent said truckers should return to talks after resuming their routes.
Choi You Sun, KBS World Radio News.
Share
Print
List