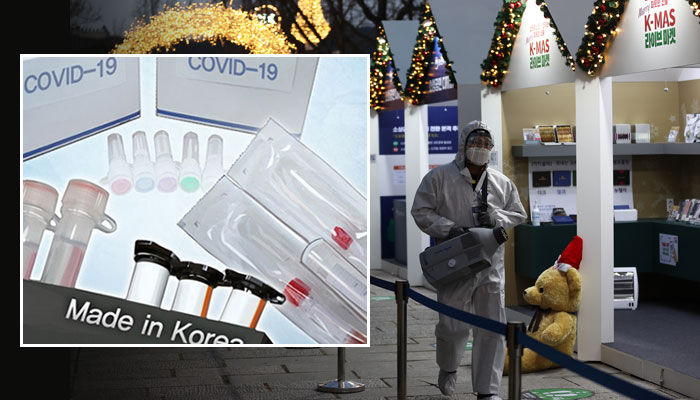 In 2020, South Korea could not escape the dominance of COVID-19. The South Korean people lost normalcy in their daily lives by being required to wear masks, restricted in social interactions and prohibited from accessing multi-purpose facilities.
A Chinese woman, who arrived from the city of Wuhan in Hubei Province on January 20, was the country's first confirmed patient. A full-scale epidemic began after a cluster appeared in connection to the Daegu branch of the Shincheonji religious sect on February 18. The first wave of the epidemic gradually subsided after peaking at a record daily number of cases of 909 on February 29. The cumulative number of cases in Daegu and surrounding North Gyeongsang Province during the one-month period totaled some eight-thousand. Since the virus had yet to spread globally at the time, countries around the world imposed entry bans on travelers from South Korea.
Clusters linked to call centers and religious facilities emerged starting in March. The government enforced social distancing regulations restricting access to multi-purpose facilities, ultimately curbing the virus' further spread. The April 15 general elections were held without leading to new clusters, introducing the international community to K-Quarantine.
The nation faced a new crisis following clusters originating from Seoul's Itaewon club district in early May, and a second wave of the epidemic hit amid an uptick in infections in connection to Seoul's Sarang Jeil Church and an anti-government rally in central Seoul in mid-August. Through enhanced measures under Level Two social distancing, or Level Two-point-Five, involving operation restrictions on restaurants, bakeries and coffee shops in the capital area and shutdowns of indoor sports facilities such as gyms, driving ranges and swimming pools, the country managed to contain the spread.
South Korea is in the midst of yet another crisis, after a third wave of the epidemic began in mid-November, with the daily count repeatedly climbing over one-thousand from December 13. In consideration of the economic impact, the government is maintaining Level Two-point-Five distancing, rather than raising it to the highest Level Three, while tightening some quarantine rules during the year-end holiday season.