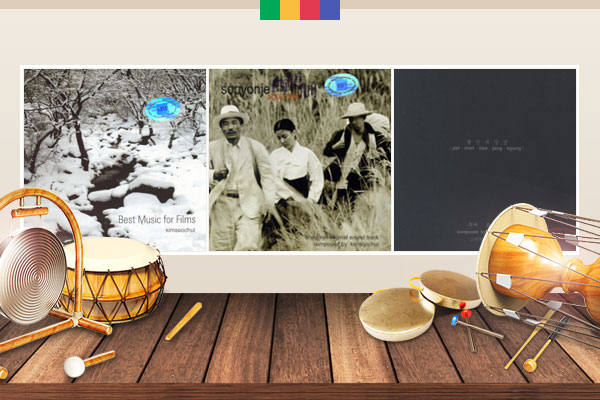 Korean traditional musicians who had studied gugak국악 for a long time are generally instilled with a sense of responsibility and commitment to preserve and develop Korean traditional music. Gugak is a cherished heritage but not that many people try to carry it on. Fortunately, barriers between musical genres have come down somewhat in recent years, so it’s become easier to find western classical musicians playing with Korean traditional instruments or Korean folk musicians singing jazz. The greatest challenge for traditional musicians is to publicize gugak to the general public so that ordinary Koreans can appreciate and cherish Korean music. There is a famous Korean pop singer who has devoted his life to studying and developing gugak. It is Kim Soo-chul, a famous rocker and pop artist from the 1980s nicknamed “Little Big Man.” He released such hits as “The One Flower that Could Not Bloom” and “I’m Coming too.” Then one day he suddenly decided to study gugak and has indulged in the field for nearly 40 years. Let’s listen to one of his works, “A Fairytale of Flowers” with Park Yong-ho playing the sogeum소금.

Music 1: A Fairytale of Flowers/ Sogeum by Park Yong-ho

Kim Soo-chul’s “A Fairytale of Flowers” was included in the original soundtrack of the 1996 movie “Festival” directed by Im Kwon-taek임권택. Kim, who was named the music director for the 1986 Asian Games and the 1988 Seoul Olympic Games, was applauded for incorporating gugak into the musical performances of these two major international sporting events. He confesses that when he started to study gugak in the mid-1980s, he was so unfamiliar with traditional music that he couldn’t stay awake in lessons for the first three years of training. It took this guitarist and pop singer that many years to accept Korean music with his whole being. He finally released a gugak album in 1987, which contained his award-winning dance piece named “The World of Spirits.” In the following year, he released another gugak album to remember his deceased father. Unfortunately, the albums flopped, selling only a few hundred copies, because gugak was not a popular genre back then. Anyone else would have despaired and given up following these two failures, but Kim continued to create gugak-based music for dances, documentaries, TV shows and films. The most well-known work of his is probably the original soundtrack of “Seopyeonje서편제,” another notable movie directed by Im Kwon-taek. The “Seopyeonje” OST album became the first gugak album that made profit, selling more than one million copies at the time. Let’s listen to one of its tracks, “Millennium Crane,” with Park Yong-ho’s daegeum performance, followed by Kim Soo-chul’s guitar sanjo산조 with gayageum.

The guitar sanjo album was released in 2002 and contained various pieces related to the 2002 FIFA World Cup Korea/Japan. The sanjo or freestyle solo pieces in the album were played with various instrument combinations, such as janggo장고 and guitar sanjo or daegeum and guitar sanjo. Sanjo, literally meaning ‘scattered melodies,’ usually refers to the tunes improvised to the beat. Kim Soo-chul’s guitar sanjo does not strictly follow the traditional sanjo beat but focuses on the improvisational aspect of sanjo to play up the gugak characteristics. Already over 60 years old, Kim still works hard to create uniquely Korean cultural contents. According to his own account, his proudest achievements is an album entitled “Palmandaejanggyeong팔만대장경” or “The Tripitaka Koreana.” When he was working on this album, he quit smoking and drinking altogether and devoted all his energy to creating an album that would leave long-lasting impressions on the audience’s hearts. We’ll wrap up this week’s Sounds of Korea with a track titled “At the Battleground” from this album.

Music 3: “At the Battleground” from “The Tripitaka Koreana”/ By Kim Soo-chul