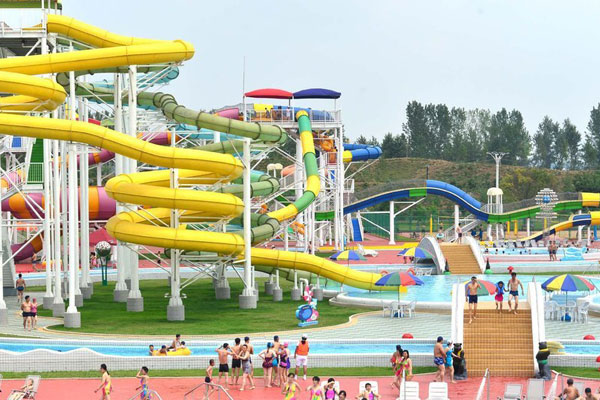 It’s another hot day under the scorching summer sun. In South Korea, some people have already enjoyed their summer vacation, while many others are planning getaways to nature. It is all the more so because locals fully enjoy the summer holiday season for the first time since the eased social distancing measures that had been in place in recent years due to the COVID-19 pandemic. So, how are people in North Korea enjoying their summer break? Today, we’re going to talk about summer vacation in North Korea with Professor Jeong Eun Chan at the National Institute for Unification Education.

Many South Koreans choose to spend their summer holidays abroad. That’s not the case with North Korean people. While I was in North Korea, I went to nearby streams or beaches with my friends during the summer and grilled meat there. The culture of going on vacation with family has not taken root in all regions in North Korea. Only some affluent people can afford to do so.

Employees in South Korea are really looking forward to their summer break. In the North, the Socialist Labor Law guarantees vacation. Under the law, laborers and office workers in general receive 14 days of leave per year, while seven to 21 days of supplementary leave are ensured, depending on occupation. In reality, however, North Koreans cannot use their paid leave properly.

To hit the road during vacation, people should be allowed to move around freely. To travel to anywhere they want, the traffic should be developed. But North Koreans in local provinces find it hard to go to Pyongyang or border regions for their vacation. To leave their residence and go to some other place, they need a special travel certificate. That’s why it is difficult for locals to take a long-distance trip, much less overseas travel. Mostly, they spend their vacation in their regions.

Also, many North Koreans just can’t afford to enjoy vacationing. The North Korean economy is still, in principle, run under a centrally-controlled, state-planned system. But actually, it is the market that keeps the economy going. As a result, both state prices and market prices exist. Due to the big gap between the two prices, locals often can’t purchase things at the market with their income set by state prices.

But it doesn’t mean North Koreans do not use their vacation at all. Local media often report about overcrowded swimming pools and beaches nationwide in the summer holiday season in July and August. Seaside beaches are the most popular summer destinations, as you may expect.

The Majon Beach Resort in Hungnam, South Hamgyong Province is one of the most famous beaches in North Korea. Living up to its reputation, the resort along the east coast is well equipped with accommodations and amenities. North Korean media introduce the place as a popular beach visited by tens of thousands of people every day in the summer season.

When it comes to famous beaches, Myongsasipri in the eastern city of Wonsan should definitely be included. The four-kilometer-long beautiful beach is renowned for its white and soft sand.

Visitors to the seaside city of Wonsan can enjoy various types of seafood. Another famous beach in the Wonsan area is the Songdowon Beach.

In North Korea, beaches are mostly visited by local residents in adjacent regions for a one-day trip. People living in faraway regions rarely go to the beaches. Locals arrive at the beaches early in the morning to find a nice spot, enjoy their leisure time there all day long and return home late in the evening.

In addition to those beaches along the east coast, famous beaches along the west coast include the Waudo Beach in Nampo City, South Pyongan Province. Local residents go to nearby beaches, rivers or valleys to catch fish, share food and take a rest, getting away from their daily routine for a while.

Many South Koreans enjoy camping in campsites equipped with amenities. Such a scene is hardly found in North Korea. Rather, North Koreans bring everything they need, including an iron cauldron, wood and dishes, when they go on a picnic to nearby streams. With the development of markets these days, it seems brokers lend vacationers what they need. Of course, it is a new trend that was never found before. In Pyongyang, rich people can enjoy their summer vacation in a luxurious way at nice facilities, where they can buy anything as long as they have money.

Young people in South Korea prepare for their summer vacation pretty early. First, they decide on where to go, how to go and where to stay. On top of that, they set up plans to get in shape. Some go on a diet to prepare for a perfect swimsuit body, while others work out to develop six-pack abs. Many care a great deal about beachwear, like swimsuits. What about North Koreans?

North Koreans are not much different from South Koreans. But very few North Korean women follow a strict meal plan for months to wear a bikini, as their South Korean counterparts do. North Koreans prefer conservative swimsuits that cover more of the body than revealing swimwear such as bikinis. Swimsuit designs in the North are not as diverse as South Korea. Wearing swimwear that shows too much of body parts are considered an indecent, non-socialist behavior. North Korean swimsuits avoid too much exposure.

Under current leader Kim Jong-un’s rule, North Korea has built or reopened amusement parks and water parks. The most well known is the Munsu Water Park in downtown Pyongyang.

Located on a 125-thousand-square-meter site, the water park has indoor and outdoor swimming pools, an indoor volleyball court, a rock-climbing wall and 27 water slides. According to North Korean media, many young people enjoy their summer there, bravely going down the almost vertical-drop water slide with a fall of 18 meters.

It is said that the Munsu Water Park can accommodate up to 20-thousand people a day. Ticket prices are very expensive, but the place is so popular that ticket scalping is rampant. Every summer, North Korean media often report about the representative water park in the capital.

The large water park is equipped with modern facilities featuring the latest technologies and ideas that appeal to the younger generation. Using a huge amount of water, the park should clean its water regularly and properly. But it seems the water is not managed appropriately. Some users are said to have complained of it. It is one thing to build a nice, modern water park. It is quite another to manage it. By running great amusement facilities, North Korea seeks to collect foreign currency circulating among the public and also from foreign tourists.

North Korean media have reported that scientists who participated in the development of the country’s Hwasong-14 missile and veterans of the Korean War had a wonderful time at a water park. That is, the facility is used as a means of propaganda.

Analysts say that reports about holidaymakers who enjoy their time at water parks or amusement parks have increased noticeably since Kim Jong-un came to power. The change is in line with the leader’s governing style.

In his initial years in office, Kim Jong-un pledged to build a civilized, socialist nation. He has since stressed that his country will focus on improving the people’s cultural lives.

After Kim Jong-un took power, North Korea set a state goal of building a socialist power. One of its specific objectives is to build a socialist civilization. Kim envisions a socialist civilization where North Koreans, just like people in other countries, go on vacations to beat the summer heat, take a leisurely holiday and have fun at a water park. The leader studied in Switzerland when he was younger. He hopes his people can follow global cultural trends. North Korea emphasizes this as the leader’s love for the people. But it is questionable if the policy reflecting the leader’s love actually applies to all the 25-million people in the North. Aside from promoting the dear leader’s love for the people, North Korea also seeks to show, internally and outwardly, that its people enjoy cultural and leisure activities.

Previously, I thought I didn’t necessarily have to go on vacation, especially during the peak season when holiday destinations are packed with people and everything is expensive. While enjoying my vacation for days in Gangneung or Jeju Island in the low season, however, I realized people, including myself, need a good rest. Now, I’m keenly aware of the importance of spending a holiday in every true sense of the word.

In North Korea, wealthy people can fully enjoy their summer break. But I’d say that a majority of North Koreans, about 70 to 80 percent of the population, are still struggling to earn their livelihood and survive on their own.

Enjoying a vacation, in a sense, is about getting away from everyday life and having fun. But it could be more about recharging one’s mind and body. We hope North Korean residents can fully enjoy their vacation as a period of having a true rest, while South Koreans can plan on spending their summer holiday in cooler regions in North Korea very soon.