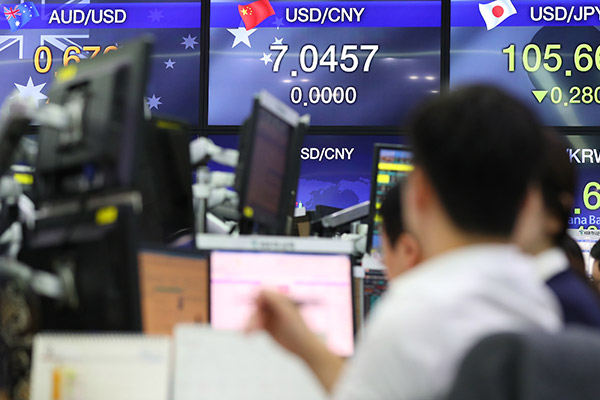 The trade conflict between the U.S. and China is deepening. Following the U.S. Treasury Department’s designation of China as a currency manipulator on August 5th, the trade feud between the world’s two largest economies is escalating into a currency war, casting a dark shadow over the global economy. Here is Cho Yong-chan, director of the America China Economic Research Institute, to discuss the intensifying trade row between Washington and Beijing.

The battle for primacy between the U.S. and China started in the form of a trade war in July of last year when the U.S. imposed tariffs on Chinese goods. The trade dispute then evolved into a high-tech battle as the U.S. slapped sanctions against the Chinese tech giant Huawei. Now, it is spreading to the currency front, with the U.S. labeling China as a manipulator of exchange rates.

The U.S. views the Chinese yuan as excessively undervalued against the dollar. Following the recent designation, the U.S. may request China to raise the value of its currency from 20 to 40 percent. In that case, China’s exports to the U.S. may suffer an additional 10 percent decline.

But China stopped buying U.S. agricultural products in protest of Trump’s threat to impose new tariffs on Chinese goods. China also allowed its currency to fall to the lowest levels against the dollar in 11 years. In response, the U.S. gave a stern warning to Beijing by branding China as a currency manipulator.

The U.S. announced on August 2nd that it would impose fresh tariffs on Chinese products. Then on August 5th, China responded with an announcement that its companies had stopped purchasing American crops. On the same day, Beijing allegedly allowed its currency to weaken and cross the psychologically important 7 yuan to the dollar level. In response, Washington immediately designated Beijing as a currency manipulator for the first time in 25 years. The worsening U.S.-China trade conflict is rattling the global economy.

The currency war between the world’s two major economies broke out on August 5th, when the Dow Jones Industrial Average dropped 767 points or 2.9 percent, marking its steepest fall of the year. Stock and foreign exchange markets in Asia have also fluctuated violently, with foreign funds showing signs of flowing out of China.

Although China is strengthening relevant regulations to prevent this, the country will be pressured to depreciate its currency further to 7.5 yuan per dollar if the local economy continues to decline. In the worst-case scenario, the value of the Chinese currency may plunge drastically to 7.9 yuan to offset the damage from U.S. tariffs on Chinese products. If that happens, a massive capital flight could happen not only in China but in other Asian countries as well. Weakening currencies of emerging economies triggered by the Chinese shock could become a reality.

The drastic fall in U.S. stocks led to a decline in stock markets in Europe and Asia.

In Korea, both the benchmark KOSPI and the secondary KOSDAQ tumbled on August 5th, forcing the Korea Exchange to activate a sidecar, a measure to restrict program trading temporarily, for five minutes on the KOSDAQ market for the first time in more than three years.

A fall in the yuan’s value will give Chinese exporters a price edge in the global market and could partly break Washington’s trade barrier. But further depreciation of the Chinese currency may trigger foreign capital outflow from the country. Chinese financial authorities are therefore likely to adjust the currency level at an appropriate time. For now, however, China’s move will prompt the U.S. to step up its pressure on Beijing and their currency war might then spread to the entire world.

The Trump administration sees the weakening currencies of its trade partners as a protest against Washington’s trade protectionism and “America First” policy, rather than as a result from differences in economic fundamentals or in financial policies. It is said that the Treasury Department suspects that countries on its monitoring list for currency manipulation are attempting to strengthen their export competitiveness by deliberately devaluating their currencies. Seeking reelection next year, Trump may exploit the currency manipulator issue at any time to put greater pressure on countries with a large trade surplus with the U.S., including China, Germany, Japan and Italy.

In its currency report in May, the Treasury Department raised the number of countries subject to currency manipulation monitoring from the nation’s 12 largest trading partners to 21 countries with a bilateral trading volume of 40 billion dollars or more a year. South Korea should brace for a possible designation although the possibility is low, since the nation has been labeled as a currency manipulator in the past.

The depreciation of the Korean won against the dollar as a result of the currency war between the U.S. and China may work favorably for domestic exporters.

Right after Washington’s designation of Beijing as a currency manipulator, the Korean currency fell as low as to 1,215 won to the dollar. It might be an opportunity for local exporters to increase their overseas sales, but the effect is not that big due to the shrinking world market amid the global economic slowdown.

Nearly 80 percent of Korean exports to China are intermediary goods. If foreign companies rush to exit China, Korean exports of those products will be hit hard. If the Korean currency continues to lose its value, foreign capital may flow out of the country. Rising import prices will discourage consumers from spending money, further dampening economic growth.

The Wall Street Journal says that South Korea is vulnerable to the U.S.-China currency war since the won follows the value of the yuan due to Korea’s extensive trade with China, while Korean firms own huge dollar debts. So, how should Korea cope with the growing economic uncertainties?

South Korea is like a small fishing boat in the eye of a strong typhoon. With the U.S. and China in a bitter confrontation in the new Cold War, there are few options available. To top it off, Korea can’t expect economic cooperation from Japan right now. It should promptly come up with measures aimed at helping local companies minimize damage from the fallout of the ongoing trade and currency war between the U.S. and China.

The government, the business sector and academia should join forces to seek ways to maintain good relations with both the U.S. and China, while businesses must quickly devise contingency plans to prepare for the worst.

While South Korea is grappling with Japan’s economic retaliation, the U.S.-China trade war is expanding. There are concerns that these mounting uncertainties may come as a perfect storm for the Korean economy. Now is time to recognize the urgency of the situation and make wise and thorough preparations.