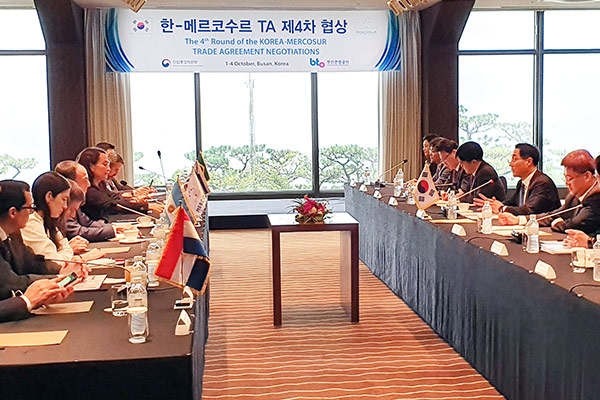 © Ministry of Trade, Industry and Energy

The South Korean government has held the fourth round of trade talks with the South American trade bloc Mercosur to seek ways to increase exports to the region. During the negotiations in Busan last week, the two sides covered areas including goods, services, investment and government procurement. So, why is Korea seeking to sign an agreement with the trade bloc? Here’s Dr. Gwak Dong-cheol(곽동철) at the Institute for International Trade, with more.

Mercosur is South America’s biggest economic bloc consisting of Brazil, Argentina, Paraguay, and Uruguay. It was established in 1991 to promote free trade within the region and impose common external tariffs. It is competing with the Pacific Alliance, another Latin American trade bloc made up of Mexico, Chile, Colombia and Peru, for economic supremacy in the region.

Despite its high growth potential, Mercosur has not signed a trade agreement with any Asian country as the market still remains closed. A trade deal between Korea and Mercosur, when concluded, will provide Korean firms with easier and faster access to the Latin American market.

Mercosur is the Southern Common Market that was initially created by the four South American nations. By promoting the free movement of goods, people and capital and eliminating tariffs among the members, the bloc has pursued a regional economic community, like the European Union.

Venezuela joined the group in 2012 but its membership has been suspended since 2016 for failing to meet basic trade standards, with anti-government rallies against President Nicolas Maduro continuing. Mercosur’s associate members include Chile, Colombia and Peru, while Bolivia is in the process of acquiring full membership. Dr. Gwak explains why it is urgent for Korea to clinch a trade pact with this South American trade bloc.

Mercosur has a combined population of 260 million and its GDP exceeds 2 trillion US dollars. The huge economic bloc is one of the world’s major suppliers of raw materials and agricultural and livestock products. Unfortunately, its economy has not grown very fast, compared to other regions, due to unstable political situations. But the governments in the bloc are now moving to strengthen market functions and open their markets further, in a major shift in their trade policies. Mercosur has actually promoted trade negotiations with the EU, Canada and Korea.

Korea needs to diversify its export destinations to better cope with growing protectionism in the global trade environment. Under these circumstances, it should capitalize on Mercosur’s recent move and push for a trade agreement with the region to use it as a bridgehead to the South American market.

Mercosur accounts for more than 70 percent of South America’s GDP, and its members have great economic potential. Resource-rich Brazil is the ninth largest economy in the world and the largest in Central and South America. Argentina, meanwhile, is improving its economic fundamentals on the back of the market-friendly reform policy advocated by the new government.

Paraguay, which has posted economic growth of over 4 percent, and Uruguay, a regional logistics hub, have also contributed to the establishment of the solid common market. With its large population and various business opportunities, the region is certainly an attractive market for global providers of automobiles, electronic goods and plants.

As an export-dependent country, Korea began joint research of a trade agreement with Mercosur in 2004 to explore new markets and diversify its trade network. Contrary to prior expectations, however, bilateral trade has not increased much.

The trade volume between Korea and Mercosur has been on a steady decline after reaching a peak of 20.8 billion US dollars in 2011. It slightly increased in 2017 to 11.1 billion dollars but again fell to 10.2 billion dollars last year. Mercosur accounted for a mere 1.2 percent of Korea’s total trade in 2017 but the figure dropped even further to below 1 percent in 2018.

Korea mainly exports industrial goods, including IT equipment, automobiles and auto parts, to Mercosur and imports mineral resources and agricultural products from the South American countries. In other words, bilateral trade is conducted in a complementary way. Among Korea’s export items in 2018, semiconductors took the lion’s share at 1.1 billion dollars. Others included cars, car parts, synthetic resin, mobile phones and flat-panel displays. In return, Korea imports raw materials such as iron ore, pulp, feed and farm products including nuts.

Trade between Korea and Mercosur countries has remained stagnant due to the latter’s previous policy to protect their own industries, a fall in raw material prices in South America and repeated political turmoil in the region.

When the Korea-Mercosur TA is concluded, Korean products exported to Brazil, including medicines, parts of mobile phones, condensers and transformers, will benefit from tariff eliminations. The same is true of Korean cargo trucks, mobile phones and their parts that enter the Argentine market. Korea is also expected to export more compact cars, mobile phones, TV receivers and motorbike gear to Paraguay and Uruguay.

When the Korea-Mercosur TA is signed, tariff eliminations will enable Korean exporters to sell more products in the South American market. At present, Mercosur imposes heavy tariffs of more than 15 percent on many imported items. Notably, no Asian country has ever inked a trade agreement with Mercosur. For Korea, Mercosur could generate a greater desired effect than any other market in the world.

Korea is the first Asian country to launch trade negotiations with Mercosur, so it should use the opportunity actively and effectively. Trade authorities in Korea need to figure out Mercosur’s tariff systems precisely and secure preferential tariffs so Korean exporters can gain stronger price competitiveness than their rivals.

But Mercosur may not open up its market overnight, as it has maintained protectionism for a long time. It is necessary for Korea to agree on a low-level trade deal first and then proceed with additional negotiations in a phased manner. It should develop economic cooperation with the South American trade bloc from a long-term perspective.

This year, Mercosur signed an FTA with the EU after 20 years of negotiations. A long and bumpy road may lie ahead for the trade negotiations between Korea and Mercosur as well. Korea needs to come up with smart trade strategies in order to reach the South American market that has boundless potential.