Share
Print
A live music performance takes place in the front of an art center. It looks like an outdoor concert, but the audience is dressed up in colorful trekking outfits. Some people even do a little stretching exercise to the music. What are they here for?

(Man 1) I’m here to celebrate the opening of the Seoul Dulle-gil Trail. I’m dressed casually. It’s going to get hot and sweaty, so it’s better to dress comfortably and wear two or three thin layers of clothes.
(Woman 1) I’m going to enjoy this walk. The music has already made me feel good, so I think I’ll be able to walk with pleasure.

Last Saturday, November 15th, in front of the Gangdong Art Center in southeastern Seoul, roughly 1,400 people gathered to participate in the first Seoul Dulle-gil Trail Walking Festival. The event was planned to celebrate the opening of all of the trail’s segments, which comes to 157 kilometers in total.

The Seoul city government has been making and connecting trails through the city’s forests, streams, and neighborhoods. It’s been a part of the municipal project to build walking paths around the city that are scenic, inviting, and eco-friendly. Now, after four years of hard work, all segments of the circular trail that loops around the city’s perimeter have been completed. Here’s Mr. Kim Seung-ryeol of the Seoul Metropolitan Government’s Nature and Ecology Division to tell us more about the trail. 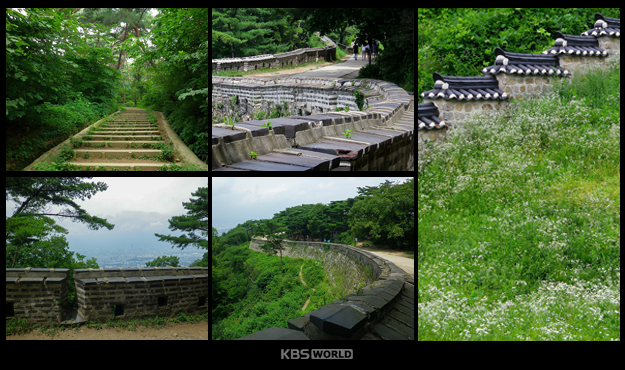 People usually climb a mountain to conquer its peak, but that is almost impossible for old people or children. So we decided to make a walking trail at the foot of a mountain so that anyone can enjoy nature. The city started this project so that Seoul residents could have a source of relaxation and healing, and enjoy trekking without having to travel to faraway places, like Jeju Island or Jirisan Mountain.

The Seoul Dulle-gil Trail is comprised of eight courses. When you follow the paths through the mountains, forests, and streams located around the outer edge of the city, you will get to learn and enjoy the capital’s history, culture, and natural ecosystem.

The most important goal of this walking trail project was to make the courses easy and pleasant. The courses were adjusted so that people would be able to breathe in the fresh air of the forests and take a break from hectic city life. There are also many cultural attractions along the city’s boundary. The courses pass through these locations so that people can learn about the history and culture of nearby neighborhoods during their hike.

The Seoul Dulle-gil Trail does not go through only mountains, because Seoul is not surrounded only by mountains. There are streams and neighborhoods as well. Of the trail’s 157 kilometers, 85 kilometers are in the woods, 40 kilometers are along the streams, and 32 kilometers pass through villages. The best part about the Seoul Dulle-gil Trail is that you can see Seoul’s cityscape from any point along the trail. You can enjoy a panoramic view of the capital city while trekking.

The first Dulle-gil Walking Festival took place in the 7.6-kilometer Godeoksan Mountain Course, from the Gangdong Art Center to Olympic Park. This stretch of the trail belongs to the 26-kilometer-long Godeok Iljasan segment. Mr. Kang In-ho of the Seoul Metropolitan Government’s Green Seoul Bureau tells us more about it.

To celebrate the opening of the trail, the walkathon was planned for the Gangdong-gu segment, which is considered the easiest and most charming walking course of the Dulle-gil Trail. In addition to Gangdong-gu, five other districts have organized their own walkathons along the Dulle-gil Trail. People in Nowon-gu are walking along the Buramsan Mountain segment and Gwanak-gu or Geumcheon-gu residents are taking the Gwanaksan Mountain course.

(Woman 1) I’m thankful that I get to walk on such a pretty path. I’m going to walk hard.
(Woman 2) I’m going to maintain my walking posture and remain happy until the end.
(Man 1) I will do my best. Fighting!
(Man 2) My goal is to finish this walkathon. I’m off to a good start and I don’t think it will take me long to cross the finish line.
(Woman 3) Walking is the secret to maintaining my health.

Dry leaves crunch under the walkers’ feet and the air is so refreshingly clear that it’s hard to believe the trail is still within the Seoul city limits. With a carpet of leaves softening their steps, children skip merrily as if they’re playing on soft pillows. 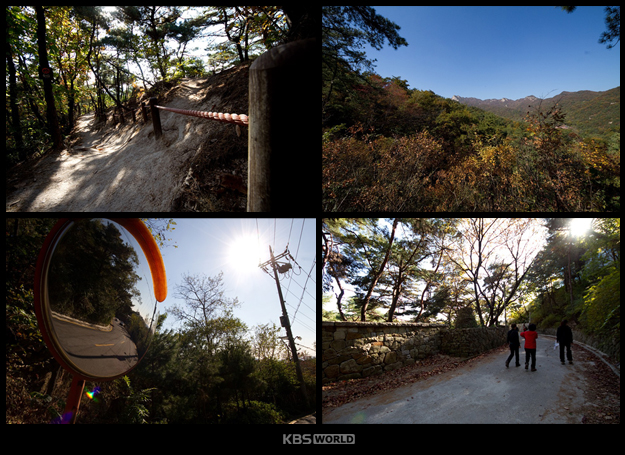 (Boy 1) It’s hard walking in the mountains, but I like it. I keep at it even though I’m struggling. I can keep going.
(Man 2) It hasn’t been long since I took up walking. It’s nice that we have the Dulle-gil Trail where we can work out and enjoy the fresh air. There used to be just forest parks near my home, but it’s great to have this new mountainous trail. But I’m already out of breath.

Each of the Dulle-gil Trail’s eight courses has its own distinct charm. If you want an easy workout, the Godeok Iljasan course is recommended. If wooded surroundings are what you’re looking for, the Daemo Wumyeonsan course or the Gwanaksan course would be perfect. The Anyangcheon course offers a lovely vista along the Anyangcheon Stream and the Yongma Achasan course gives you a panoramic view of Seoul. But whichever course you choose, you will have no problem getting there, since all the courses are accessible by public transportation. Mr. Kim Seung-ryeol of the Seoul Metropolitan Government explains.

The Dulle-gil Trail’s first course is named Surak Buramsan. It starts off at Dobongsan Station and takes about six and a half hours to complete the 14.3-kilometer segment. The trail takes you to Suraksan and Buramsan Mountains, but only around the foot of those mountains, not to the peaks. So it’s a great trail to enjoy the mountain forests.

The second course is the Yongma Achasan course, which starts out at Hwarangdae Station and continues for 12.6 kilometers, taking a little over five hours to finish.

There is the Mangwuri Memorial Park along the route, where many patriots are buried. Trekkers will be able to remember the painful past of Korea. The path goes up the ridge of Achansan Mountain for three or four kilometers, from where you can see the entire city and the Han River. It’s the most scenic course of the Dulle-gil Trail.

The third course is the Godeok Iljasan course, where the walkathon took place. It’s 26.1 kilometers long and takes nine hours to complete, but it is classified as a beginner’s course. The Daemo Wumyeonsan course comes up next, measuring almost 18 kilometers and taking up 8 hours.

It starts at Suseo Station and there is a museum for Yun Bong-gil, one of the most admired freedom fighters in Korea, along the way. This segment ends at Sadang Station. Daemosan Mountain and Wumyeonsan Mountain are known as having the densest forests in southern Seoul. This path offers an interesting view of the bustling Gangnam district.

Next is the Gwanaksan Course, nearly 13 kilometers and six hours long. This is a difficult route designed for more experienced mountain climbers.

Bukhansan Mountain and Gwanaksan Mountain are two most famous mountains in Seoul. This course cuts across Gwanaksan Mountain, which features a lush forest, an unobstructed view of southern Seoul, and various cultural sites such as a Buddhist temple, Nakseongdae Park, and Samsungsan Catholic Church.

The trail continues on to the 18-kilometer, four-and-a-half-hour Anyangcheon course, which follows along the Anyangcheon Stream and the Han River. It may seem a little long, but there are several subway stations along the way, so if you get tired, you can always hop on a train. This path follows the rivers while most of the Dulle-gil segments pass through the city’s forests and mountains. The riverside roads are famous for their cherry blossoms, so spring is expected to be the best time to walk this route.

The seventh course is the Bongsan Aengbongsan path, measuring 16.6 kilometers and taking a bit more than six hours. The trail passes through the World Cup Stadium and several parks nearby.

It starts at Gayang Station and passes through the World Cup Park, which used to be a landfill. The city turned it into a park in time for the 2002 FIFA World Cup. Aengbongsan Mountain features a beacon fire station, which used to alert enemy invasions by lighting up the beacons.

The last course is the Bukhansan course, which is the longest one at nearly 35 kilometers with a walking time of 17 hours. It’s impossible to complete it in a single day. There are many attractions that deserve to be seen, such as the Bukhansan Ecological Park, the tomb of independence fighter Yi Jun, and the National Cemetery for the April 19th Revolution.

The Dulle-gil Trail project started in 2011 and it took four years to open all eight courses, the latest one being the Godeok Iljasan course. The city of Seoul is also giving out stamp tours to encourage people to walk the entire 157-kilometer trail.

There are stamping stations along the Dulle-gil Trail, where visitors can get their verification stamps for completing each segment. Once you get all 28 stamps, the city gives you a Seoul Dulle-gil completion certificate signed by the Mayor of Seoul.

The latest health trend is to walk the mountains, forests, and rivers to heal the mind and body. What better way to keep fit and enjoy the fall season than to explore the historical and cultural sites scattered along the routes of the newly opened Seoul Dulle-gil Trail.
Share
Print
List