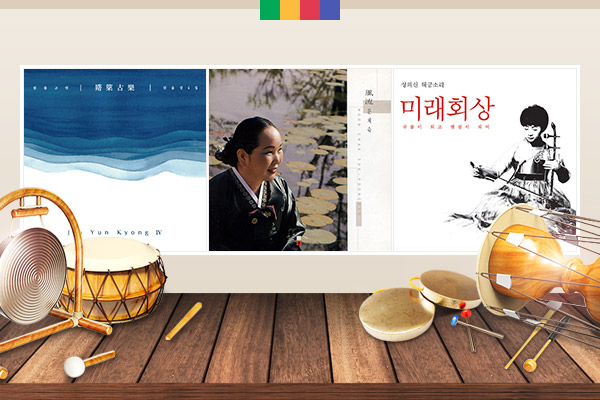 Choi Chi-won, a renowned philosopher and poet of the Silla period, once wrote that “There is a profound principle in this country and that is called pungryu.” He claimed that pungryu combines Confucianism, Buddhism and Taoism and changes every living thing it touches. It seems pungryu was a product of Korea’s own faith and imported belief systems, which became a way of teaching nature and life. Over time, however, the term pungryu came to describe the enjoyment of poetry, art and music in harmony with nature. When a person is described as someone “versed in pungryu,” it usually means that the individual is generous and knows how to appreciate the arts. There are a couple of pungryu-related music terms – julpungryu줄풍류 and daepungryu대풍류. The former refers to pungryu music played with string instruments while the latter refers to that played with bamboo instruments. There used to be a gathering called “pungryu-bang풍류방,” which was a group of music lovers who got together to play and listen to music. Pungryu music was largely played in such gatherings and best-known pungryu music pieces today are an instrumental work titled “Yeongsanhoisang영산회상” and a poem-based song. Today’s first piece is one from this collection of nine movements. Piri musician Jin Yun-kyong plays “Sangryeongsan Mountain상령산,” the first movement of “Yeongsanhoisang.”

“Yeongsanhoisang” is comprised of nine movements, from “Sangryeongsan Mountain” to “Military Music.” It takes between 45 and 50 minutes to play all nine movements. Each movement is written to accommodate a single instrument. For instance, the smallest piri called sepiri세페리 is played to highlight the softer-sounding string instruments like gayageum가야금 or geomungo거문고. Sometimes danso단소 or yanggeum양금 with a lighter tone is added to the mix. There are several different ways to play “Yeongsanhoisang.” Just one or two movements can be played separately, or a single instrument can be used to play each movement. When playing the slow-paced and lengthy “Sangryeonsan Mountain” movement, the musician can show off his or her talent by playing variations. When only wind instruments are used to play “Yeongsanhoisang,” it is called “daepungryu” as mentioned before. Daepungryu was played mainly for dance performances in royal palaces. “Yeongsanhoisang” was played in local rural communities as well. In such cases, musicians incorporated musical sentiments typical of the region to the piece. Such “Yeongsanhoisang” was called “hyangje julpungryu향제 줄풍류,” while the version played by folk musicians was called “folk pungryu.” “Yeongsanhoisang” tends to be quiet and unvarying in pitch and beat, but the folk pungryu version is typically faster and more laden with emotion. Coming up next is folk pungryu pieces called “Taryeong타령” and “Gunak군악” or “Military Music.” Gayageum is played by Moon Jae-sook, daegeum by Hong Jong-jin and janggu by Kim Jeong-su.

“Yeongsanhoisang” originated from a Buddhist song that comprises of just seven letters of Yeongsanhoisangbulbosal “영산회상불보살.” The story behind it is that when Buddha preached at Gridhakuta or Vulture Peak in India, more than eighty-thousand Buddhist saints and tens of thousands of intimate followers such as Brahma-deva -- also known as the creator lord – as well as the dragon king gathered to hear his teachings. The seven-letter term “Yeongsanhoisangbulbosal” supposedly describes this majestic scene. It is unknown how and why Buddhist music became a part of pungryu music, but it appears that instrumental musicians started playing it since the mid-Joseon period. The first such piece was “Sangryeongsan Mountain” and many variations continued over the next few centuries. Today’s last piece is “Seryeongsan세령산 Mountain” from “Yeongsanhoisang.” This string instrumental piece centers around haegeum, yanggeum and surprisingly, sitar, an Indian plucked string instrument. Today’s version will be played by haegeum virtuoso Sung Eui-shin.