Trump Says N. Korea Wanted to Dismantle One or Two out of Five Nuclear Sites 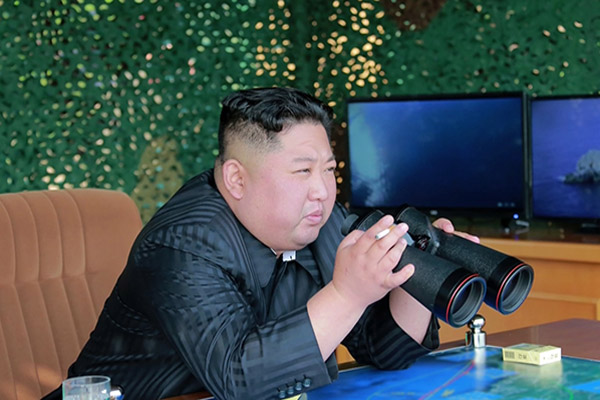 U.S. President Donald Trump has revealed more about what happened at his second summit with North Korean leader Kim Jong-un in Hanoi and why it broke down without any agreement. In an interview with a local broadcaster on May 19, Trump also may have disclosed the number of North Korean nuclear sites known of by the U.S.. With more, here’s Shin Beom-chul, director of the Center for Security and Unification at the Asan Institute for Policy Studies.

Trump told Fox News in an interview that North Korean leader Kim Jong-un wanted to scrap only one or two out of five nuclear sites in the North during their summit in Hanoi. In other words, the U.S. called for North Korea to dismantle all five sites, but the North refused to accept the demand, resulting in the collapse of the negotiations. It’s unclear whether this story behind the Hanoi summit is true or not. But Trump’s recent remarks are in line with his earlier comments that the North appeared to be surprised during the summit to learn that the U.S. was aware of its additional nuclear sites.

Since their Hanoi summit in February, North Korea and the U.S. have blamed each other for the unsuccessful negotiations. Trump has now given his side more ammunition by saying there are three more North Korean nuclear facilities, in addition to the ones established at Yongbyon and Punggye-ri.

The international community is wondering what the undisclosed nuclear facilities are like and where they are. I assume the U.S. has pretty full information about that. Suspected uranium enrichment facilities in two North Korean regions, Kangson(강선) and Bungang(분강), have been mentioned by analysts as possible additional nuclear sites Trump wanted to eliminate. There is speculation that a facility for producing nuclear weapons is located in another region. It seems Trump pointed at those facilities.

It is assumed that the one or two sites North Korea was willing to dismantle are its main nuclear facility in Yongbyon - which has been on the negotiating table before -  and the Punggye-ri nuclear test site, which the North claims to have fully demolished in May last year.

Analysts have yet to confirm what other sites Trump may be referring to. Based on satellite imagery analysis, Kangson, on the outskirts of Pyongyang, may be the location of one such site.

Other nuclear sites are presumed to be located in Taechon in North Pyongan Province and Heechon in Jagang Province.

So then, why did Trump cite North Korean nuclear facilities as the reason for the failed Hanoi summit at this particular point in time, nearly three months after the summit?

Trump is trying to say that it was only right that he chose not to agree to a deal in Hanoi. In addition to North Korea-related stories, he talked about various other issues including his domestic policies and the Iranian nuclear issue during his interview with Fox News.

The five sites Trump mentioned should be dismantled by all means and then North Korea’s weapons-grade nuclear materials as well as nuclear weapons must be removed. From Washington’s point of view, this is the complete denuclearization of North Korea. Therefore, North Korea may ultimately have to accept these demands if it wants to move forward with negotiations with the current administration.

North Korea and the U.S. have been far apart on denuclearization since their Hanoi summit. While North Korea stresses self-reliance, the U.S. continues to impose sanctions on the North - though it may not go as far as applying military pressure - in a move to induce North Korea into returning to talks.

Through his comments, Trump seems to be stressing that North Korea is responsible for the rising tension between the North and the U.S. and their stalled negotiations. At the same time, the American president reaffirmed Washington’s desire for a one-off deal to achieve the complete denuclearization of North Korea. The remarks may also be early stage-setting for next year’s presidential election.

On May 9, meanwhile, the U.S. seized North Korea’s second-largest cargo ship, the Wise Honest, for shipping coal and other materials from the North in violation of U.N. sanctions and U.S. domestic law. Though the U.S. Justice Department said that the seizure has nothing to do with recent projectile launches by the North, the move coincides so closely as to be interpreted as a warning message from Washington against further provocations. The seizure, as expected, drew a strong backlash from North Korea.

North Korea has typically complained of what it believes are unfair practices through its top envoy to the U.N. This time, too, North Korea’s U.N. ambassador Kim Song (김성) requested immediate return of the North Korean cargo ship on May 21, claiming that Washington’s unilateral sanctions against the North are illegal under international law.

But the U.N. Security Council resolutions themselves condemn North Korea’s nuclear weapons development. The international community is unlikely to change its mind, thus Pyongyang’s protest will have limited impact.

North Korea is sensitive about the first direct vessel seizure by American authorities. Previously, Pyongyang said that it would wait until the end of the year for the U.S. to make “a new calculation” - that is, lift sanctions against the North. On the contrary, however, the U.S. has not only expressed an unwillingness to do so, but has instead ramped up pressure on the North. Thus, prospects for denuclearization talks remain murkier than ever.

North Korea will likely use the latest incident as an excuse to denounce the U.S. But the U.S. won’t care about the North’s complaint, so the two countries are expected to remain in a confrontational mode for some time.

During North Korea’s Supreme People’s Assembly session last month, leader Kim Jong-un said that he would wait until the end of the year for the U.S. to make a “courageous decision”.

How effectively international sanctions on the North will work until the year’s end may determine who will gain the upper hand at future negotiations between Pyongyang and Washington. In the process, tensions may rise yet again. But I imagine neither side will walk away from negotiations altogether.

The standoff between North Korea and the U.S. has intensified since their botched summit in Hanoi. While North Korea is strongly urging the U.S. to lift international sanctions on the North, the U.S. seems intent to keep sanctions in place until North Korea fully denuclearizes. It seems unlikely the impasse will be overcome anytime soon.