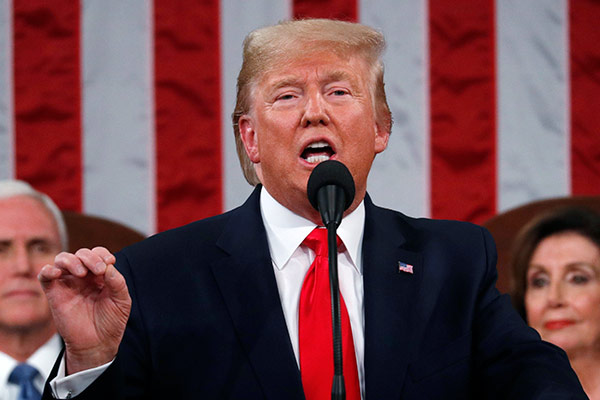 It’s been almost a year since the second summit between North Korea and the U.S. took place in Hanoi. Unfortunately, their nuclear negotiations have had a rough time since then.

This means there is a void in the diplomatic lineup in charge of Washington’s North Korea policy and a difficulty in reactivating the North Korea-U.S. dialogue channel, which has already lost steam. Here is Cho Han-bum, a senior researcher at the Korea Institute for National Unification, with more.

Both North Korea and the U.S. have changed officials involved in the Hanoi summit and their working-level talks in Stockholm last year. Washington’s top envoy for North Korea Stephen Biegun has been promoted to Deputy Secretary of State, while Mark Lambert and Alex Wong have been assigned to new roles—a move to possibly weaken the U.S.’s negotiation team on North Korea.

Trump believes that he did make some achievement in regards to his North Korea policy. He is sure that North Korea-related issues will not derail his reelection bid, as long as North Korea refrains from nuclear and intercontinental ballistic missile or ICBM tests. Obviously, he has decided to maintain the situation just the way it is. Of course, the best scenario would be some visible result at the denuclearization talks. But Trump may be aware that it would be very challenging to do so. For now, he doesn’t necessarily have to produce a result at the negotiations, so he has no reason to organize a team with that purpose.

It is uncertain when and how the vacuum in Washington’s nuclear negotiation team will be filled again. Replacements may not be decided for some time, darkening the prospects of talks with North Korea.

The South Korean government says there should be no major problem, since Biegun still assumes the post of Special Representative for North Korea. Foreign Minister Kang Kyung-hwa has stressed that concerns over a void in Washington’s North Korea affairs are groundless, as Biegun still plays a leading role in dealing with North Korea, while Seoul and Washington are operating various communication channels.

However, some analysts are worried that the U.S. may not respond properly to any unexpected development related to North Korea.

While Biegun will reportedly continue to lead denuclearization talks, he has to deal with a wider range of issues covering the entire world as Deputy Secretary of State. So, he may not be able to focus solely on North Korea issues, as he did in the past. But the Seoul government, for its part, finds it difficult to explicitly say that the U.S. team on North Korea has weakened.

The series of staff changes in the U.S. have to do with the recent political climate in Washington. Trump never mentioned North Korea during his State of the Union address on February 4th. On February 10th, CNN reported that Trump wouldn’t want another summit with Kim Jong-un until the presidential election. On February 12th, National Security Adviser Robert O’Brien made ambiguous remarks about the need for a North Korea-U.S. summit. Moreover, Defense Secretary Mark Esper has called North Korea a “rogue state.” Overall, prospects for North Korea-U.S. dialogue have become even murkier, while Trump seems to be less interested in North Korea.

Trump will now focus on his reelection campaign in earnest. Diplomatic issues, including those related to North Korea, never influenced U.S. presidential elections, which were rather affected by domestic politics, scandals, tax issues, medical insurance, the economy and the like. Trump has already touted North Korea’s suspension of nuclear and ICBM tests as his diplomatic achievement. So, he thinks it should be okay as long as Kim Jong-un does not cross the red line. It looks like he has lost interest in North Korea-related issues.

Trump’s current attitude may not be a very good sign for North Korea. Kim Jong-un has already warned that his country would take shocking actions and the U.S. would see a new strategic weapon.

In response to Washington’s recent attitude, North Korea may resort to an even stronger provocation. Mr. Cho predicts that Pyongyang will make additional provocations in order to raise its bargaining power against Washington.

Trump’s declining interest in North Korea will make the denuclearization talks lose steam, and it could prod Kim Jong-un into launching a provocation such as a nuclear or ICBM test, which is regarded as an act of crossing the red line. The North will find it dangerous to cross the line, but it cannot attract Trump’s attention unless it does so. To solve the dilemma, North Korea may threaten the U.S., with its foot placed on that very line. In other words, it may unveil a rocket engine test, increase the amount of nuclear material or restore its Punggye-ri nuclear test site. But if provocative acts like this do not produce a desired effect, North Korea may go as far as to cross the red line. This is a very disturbing scenario.

Many analysts predict that North Korea will not cross the red line for the time being, because such a high-intensity provocation could break its negotiations with the U.S. altogether. This is not what North Korea wants. Furthermore, the U.S. is still in a position that it will seek dialogue with North Korea. Clearly, there are some positive factors that raise expectations for future North Korea-U.S. relations.

The U.S.’s official position is that it will solve problems through dialogue. Last year, Biegun visited Seoul to propose a meeting with North Korea at Panmunjom and made a previously unannounced trip to Beijing as well. It shows Washington’s commitment to dialogue with Pyongyang. Alex Wong has recently visited South Korea to discuss the Seoul government’s idea of conducting individual tours to North Korea and ways to break the deadlock in inter-Korean ties. So, the U.S. government still keeps the door open for dialogue.

If the North and the U.S. manage to make progress in their nuclear talks through dialogue, it would be ideal. Dialogue is also a means of dissuading North Korea from crossing the red line, which the U.S. dislikes the most. So basically, the U.S. advocates dialogue.

The South Korean government, too, is making efforts to keep the dialogue momentum between the North and the U.S. alive. Foreign Minister Kang says that inter-Korean talks should be linked with North Korea-U.S. dialogue to create a virtuous circle, stressing that revitalizing inter-Korean cooperation is one of the Seoul government’s goals this year. The U.S. is echoing this view.

South-North relations have been stalled since the collapse of the Hanoi summit. The South Korean government’s efforts to improve cross-border ties should hopefully lead to facilitating North Korea-U.S. dialogue.