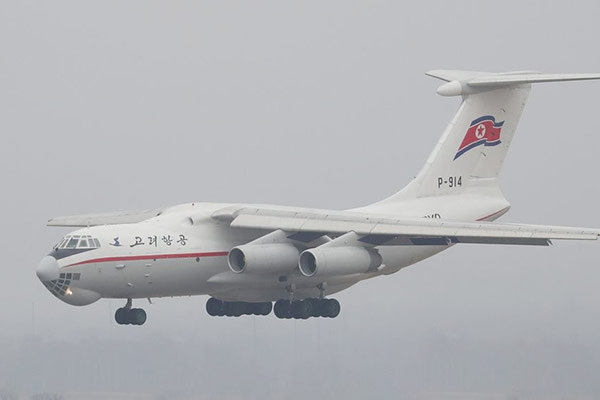 The South Korean government has decided to support the local airline industry, which has taken a direct impact from the COVID-19 virus outbreak, as the number of flights between South Korea and China has decreased lately by more than 70 percent. The International Civil Aviation Organization has forecast that the virus outbreak may result in a 40 percent reduction of global airline capacity for travelers in the first quarter of this year to cause global airline revenue to fall by up to 5 billion US dollars. While the international aviation industry has been hit hard by the virus, attention is drawn to the airline industry in North Korea. Today, we’ll learn about North Korea’s flag carrier and its operations from Kang Mi-jin, a reporter at the online newspaper, Daily NK.

Air Koryo is North Korea’s only commercial airline. Its fleet of 64 planes consists of 29 main and 35 secondary models, mostly from Russia.

The history of the North’s civil aviation dates back to December 10th, 1946, when an aircraft construction central committee was established.

In December of 1953, North Korea signed an agreement with the Soviet Union on a joint venture air company to start the first regular international flight service between Pyongyang and Chita in eastern Siberia via the Chinese city of Shenyang.

In May of 1954, North Korea opened the first regular domestic air routes linking Pyongyang with two major cities in the northern part of the country, Hamheung and Chongjin. In September of 1955, the nation brought in planes from the Soviet Union to establish the Korea Aviation Service Company and began to operate the Civil Aviation Administration of Korea under the Cabinet.

Air Koryo joined the International Air Transport Association in 1996 and was given a two-character airline code, JS. Air Koryo operates services to Beijing, Shanghai and Macau in China and Vladivostok in Russia.

As U.N. sanctions required North Korean workers abroad to be repatriated by December 22nd of last year, promoting tourism would be the only option to earn foreign currency for the North. So, North Korea and China have expanded bilateral air routes. It comes as little surprise that most of Air Koryo’s international flights are to China, although it has temporarily suspended flights to and from China and Russia due to the COVID-19 virus.

Domestic air services are also available in North Korea. Local citizens have been allowed to travel in the country by plane since 2014. But in reality, this is all just pie in the sky.

Ordinary citizens just can’t afford to use airplanes because air travel requires such a complicated procedure and tickets are ridiculously expensive. People who hope to use a plane should first get a travel certificate and apply for an approval number at local offices.

Bribes are necessary in the process. High officials can easily receive an approval number without having to give bribes, but that’s not the case with general citizens.

They also need to report their flight purposes to security officials in their regions. On the surface, North Korea says it operates domestic flights for the convenience of the public. But in practice, it is almost impossible for citizens to travel by plane.

North Korea began operating domestic flights in 2014 when the airfare between Pyongyang and Samjiyon was 92 dollars, while it cost 83 dollars for a flight between Pyongyang and Orangson. It was an extremely high price to pay for North Koreans, as it was 250 times more than the ordinary worker’s monthly salary of 0.3 dollars. Moreover, traveling is strictly restricted in the North, and air travel in particular, is possible only for the privileged. Even if people manage to get aboard, they are not very satisfied with outdated Air Koryo planes.

In fact, Air Koryo has a bad reputation as the world’s worst airline. It has been under sanctions by many countries, including the U.S., due to its dispatch of workers abroad, delivery of cash earned by North Korean diplomats overseas, transportation of weapon parts and even involvement in the North’s nuclear weapons development.

Air Koryo has been awarded just one star by Skytrax, a U.K.-based air transport rating agency, for five consecutive years from 2012 to 2016. That means it has received an extremely poor mark in safety.

Skytrax selects the best airline and airport of the year, based on its review of service quality. It rated Air Koryo as the world’s worst airline for five years in a row, giving one-star rating out of a possible 5. Air Koryo’s obsolete fleet is at the very bottom of world airline rankings, in terms of safety, technical failures, in-flight meals and customer service.

As a matter of fact, Air Koryo is regarded as a company disguised as an airline with a mission to facilitate North Korea’s intelligence activities abroad. In 2016, the U.S. Treasury Department added 16 aircrafts of Air Koryo to the list of sanctions for their links to weapons of mass destruction and labor exports.

When North Korean leader Kim Jong-un’s half brother Kim Jong-nam was killed with nerve poison in 2017, the Malay police pointed to an employee of Air Koryo as one of the suspects. Previously, Air Koryo operated services to some 10 cities in six different countries, including Thailand, Pakistan and Kuwait. Having been embroiled in the scandalous allegation, however, its flights have reduced.

But North Korea’s aviation industry may change down the road, as leader Kim Jong-un is known as an aircraft lover.

Former leader Kim Jong-il never used an airplane and traveled only by rail. In contrast, his son and current leader Kim Jong-un is known to be pretty much attached to airplanes. Foreign media called Kim Jong-un’s private jet “Air Force Un,” compared to Air Force One, the U.S. presidential aircraft.

Kim used his jet Chammae(참매)-1 when he inspected the Dongchang-ri missile launch site right before the long-range missile test-firing in February of 2017 and also when he observed the construction site of the Mirae Scientists Street in Pyongyang in February of 2015. At the time, North Korean media unveiled the photo of the inside of the jet.

Kim Jong-un’s private jet, codenamed “Chammae-1,” is a modified version of Ilyushin-62M airliner, which is the Soviet-era jet. It can fly at a top speed of 900 kilometers per hour and accommodate up to 200 people. Before the first North Korea-U.S. summit in Singapore in 2018 and the second one in Vietnam in 2019, it was a point of speculation if he would fly to the summit venue on his private jet. It turned out that he used different transportation means due to safety concerns. But in November of last year, he boarded his jet and flew to the Wonsan-Kalma coastal area, where a large-scale tourist zone was under construction, to watch air training of the Air Force.

With a special interest in airplanes, the leader has increased investment in the aviation industry.

North Korea has been “face-lifting” the Sunan International Airport in Pyongyang, constructing new buildings and refurbishing runways. It has introduced new aircrafts as well. All these efforts have the purpose of attracting more tourists by air.

Wonsan Kalma Airport on the North’s east coast, a former military airfield, has now become the nation’s second largest international airport, following the Sunan Airport. It opened a new terminal in 2015 and carried out large-scale repair work. The following year, an international air show was held there.

North Korea is pushing for the construction of Pyongyang International Airport as part of its ten-year economic development plan, indicating that the isolated regime is seeking to promote tourism in order to find a way out of international sanctions.

As the COVID-19 virus has emerged as an unforeseen factor to determine the course of North Korea’s tourism, it remains to be seen whether the nation can continue to accelerate the development of its aviation and tourism industries.

(Next week, we’ll talk about graduation and entrance ceremonies in North Korea.)