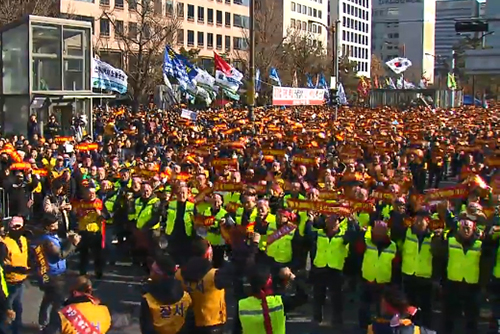 South Korea's taxi industry associations and labor groups plan to stage a massive rally in front of the National Assembly on Thursday to protest Kakao Corporation's launch of a ride-sharing service.

Police said Wednesday that four taxi industry and labor groups are scheduled to hold the rally starting at 2 p.m. and march in the area from 4 p.m. to 6 p.m.

While the organizers registered some 30-thousand protesters to take part in their third rally since October this year, they expect as many as 100-thousand taxi drivers and unionists to participate since drivers plan to suspend operations for the day.

Dispute over the carpool program was further aggravated following the death of a cab driver who set himself on fire last week in protest.

The industry and labor groups want to ban Kakao's entry into the commercial ride-sharing service market over concerns it would hurt their business.
Share
Print
List