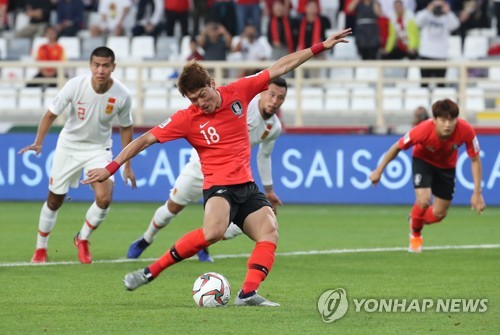 In the country's final Group C match at the Al Nahyan Stadium in Abu Dhabi, forward Hwang Ui-jo scored on a first-half penalty kick and defender Kim Min-jae added another on a header in the second half.

Son Heung-min of Tottenham Hotspur in the English Premier League made his first appearance in the tournament on Wednesday, breathing life into the offense of the Taegeuk Warriors.

With the win over China, Team Korea finished first in Group C with three straight wins and advanced to the second round with nine points.

South Korea, chasing their first Asian Cup title since 1960, will take on a team finishing third from Group A, B or F on Tuesday.
Share
Print
List