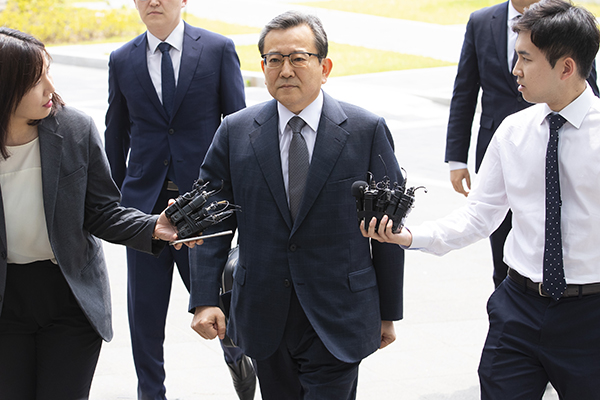 The prosecution is seeking a court warrant to arrest a former Vice Justice Minister Kim Hak-ui over allegations that he received bribes and sexual favors from a local land developer.

The task force looking into the case said on Monday that it requested the Seoul Central District Court to issue an arrest warrant for Kim on bribery charges.

Kim, known to be a close acquaintance of former President Park Geun-hye, took office as vice justice minister in March 2013. He stepped down from the post just six days later amid allegations he attended a sex party hosted by developer Yoon Jung-cheon at his villa in Wonju, Gangwon Province.

Kim is accused of receiving over 100 million won in bribes from Yoon in exchange for business favors between 2006 and 2008, and over 30 million won from another businessperson. He also faces allegations that he sexually assaulted a woman at an event arranged by Yoon in 2008.

The former vice minister reportedly denied most of the allegations during two rounds of questioning by prosecutors, claiming he does not know Yoon.
Share
Print
List