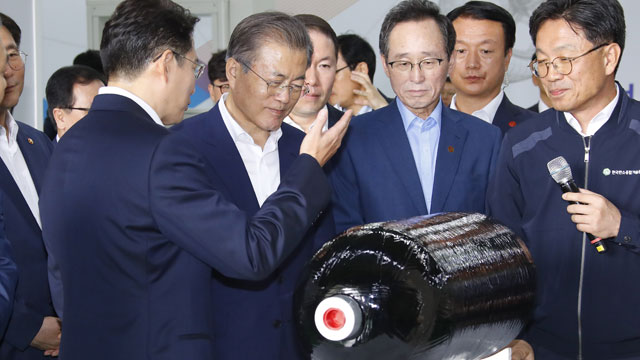 President Moon Jae-in has visited a local producer of a material that's expected to be affected by Japan’s recent decision to remove South Korea from its whitelist of preferred trade partners.

Executives and employees of Hyosung Advanced Material, including Hyosung Group Chairman Cho Hyun-joon, received the president on Tuesday at the company’s assembly line in Jeonju.

The Hyosung affiliate produces carbon fiber, one of the country’s strategic components. The material was mentioned as a potential victim of Japan’s trade restrictions.

President Moon said the country needs to reduce its dependency on a particular country for key components in order to become an economic powerhouse that cannot be easily swayed.

Cho pledged that Hyosung Group will invest one trillion won into the Jeonju assembly line by 2028 to raise the company’s annual carbon fiber production capacity to 24-thousand tons from the current two-thousand tons.
Share
Print
List