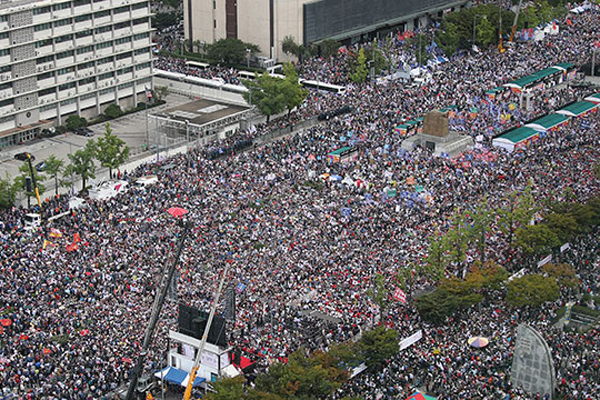 Anchor: South Korea's political parties are bickering over Thursday's large-scale rally in downtown Seoul, where participants criticized the Moon Jae-in administration and called for the dismissal of Justice Minister Cho Kuk. Supporters and opponents of the minister are expected to take to the streets again this weekend for more public rallies.
Choi You Sun has the details.

A massive rally calling for the dismissal of Justice Minister Cho Kuk took place in downtown Seoul on Thursday.

The participants included those led by the main opposition Liberty Korea Party(LKP) and conservative civic groups, all calling for Cho's expulsion amid a prosecution probe into corruption allegations surrounding his family. An alliance of university students also took to the streets to demand the same in a separate rally later in the evening.

They also criticized President Moon Jae-in for appointing Cho, despite concerns about the allegations, as well as his economic and foreign policies.

The chairman of the ruling Democratic Party(DP), Lee Hae-chan, heavily criticized the LKP on Friday for being caught up in mobilizing supporters for the rally when it should have been concerned about the casualties and damage caused by Typhoon Mitag.

The ruling party said Thursday's rally was politically-motivated and attempted to draw the line between the LKP's action and the large-scale rally held last weekend in support of the justice minister and the Moon administration's prosecution reform drive.

Meanwhile, supporters of Cho and those calling for prosecution reform plan to gather for yet another rally in front of the Supreme Prosecutors' Office in southern Seoul this Saturday.